Folksy pop duo Johnnyswim made a side stop on their national tour to perform for students at Liberty University Convocation on Friday. The group — married songwriters Amanda Sudano and Abner Ramirez — shared a number of their beautiful melodies about love, searching, faith, hope, and redemption, including “Don’t Let It Get You Down,” “First Try,” “Diamonds,” and their hit “Home,” which they performed as they meandered through the crowd.

“The force that binds us together is much stronger than the forces that try to tear us apart,” Ramirez said, explaining the meaning behind “Drunks” and launching into the song, which contains lyrical references to Scripture.

They even dedicated “In My Arms,” a duet about enduring love, to a student couple who had recently gotten engaged. 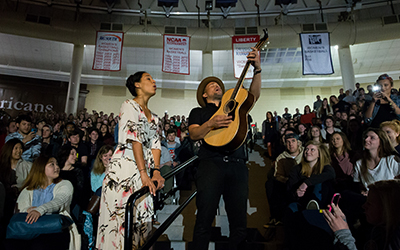 Quick-witted, down-to-earth, and full of good humor, the couple, who live in Los Angeles, had no trouble relating to the student body, who laughed along as the couple revealed tidbits about their lives — how they met in church and how they write songs together as part of maintaining a sense of adventure in their marriage. They shared their favorite cities (Ramirez said “New York” and Sudano’s was “Paris”), favorite television show to binge (“Psych”), and the latest book they read (his was a science fiction novel, “Lies of Locke Lamora;” Sudano’s was a potty training book for their 2-year-old son).

Sudano and Ramirez also shared how their band name was made up on a whim with no real backstory.

“Every time we tell somebody about this, we make something up,” Sudano confessed. She said some people even believe the name is in honor of a friend who drowned in an open water race.

“If you hear a story about the name,” Ramirez added, “it is not true.”

Before launching into their set, Ramirez shared that although the group is not necessarily labeled “Christian,” they bring Jesus with them everywhere they go and use their music to spread love.

“I remember the moment (at age 19) that faith really became mine,” Ramirez said, noting that he accepted Christ as a young child. “It was more than words on a page, it was more than an instruction manual — it was actually during worship, and I remember walking in during worship and being confronted … with an entity that I was in awe of, and I realized how loved I was, how cared for I was.”

He said he realized that “Jesus is not just in a church.”

That lesson continues to impact Ramirez even as he tours in “secular” venues.

“I feel more activated in my faith today than I ever have before.” 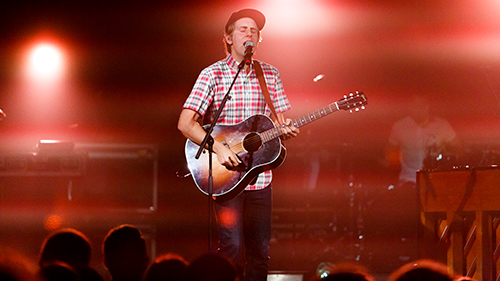 Liberty students have opportunities to hear from an eclectic lineup of artists each semester, whether during Convocation or special concerts. Already this year they have heard from Elevation Worship and songwriters Jonathan Cain (of Journey), Dave Barnes, Ben Rector, and Christy Nockels, and can look forward to a worship Convocation with Mosaic MSC (April 12) and concerts with Ellie Holcomb (March 31, LaHaye Event Space), for KING & COUNTRY (April 8, Vines Center), and Oh, Sleeper (April 21, LaHaye Event Space). Visit Liberty.edu/StudentActivities for tickets and more information.