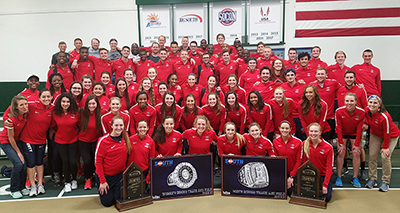 Liberty made it a perfect 20 for 20 in winning men’s team titles all-time at the meet, but it was not easy. The Flames had to come from behind on Sunday to defeat runner-up Campbell by a 205-170 count, marking Liberty’s second smallest margin of victory in meet history.

The Flames won four men’s events on Sunday, scoring 26 or more points in three of them (200, 400 and 60 hurdles). As a result, Liberty extends the longest active conference championship streak in NCAA Division I men’s indoor track & field for another season.

The Lady Flames outscored second-place Campbell by 33 points (207-174), earning their second straight title and their 12th indoor championship overall. Liberty scored points in all 11 of Sunday’s events, winning five of them.