After accepting Christ and abandoning the mainstream music scene, heavy-metal guitarist Brian “Head” Welch, a founding member of the multi-Grammy Award-winning band Korn, shared in Liberty University Convocation on Monday how God called him back into the group so that he could reach the lost and hurting in unexpected places.

“Jesus is just wild,” Welch told the Vines Center crowd during a Q & A moderated by David Nasser, Liberty’s senior vice president for Spiritual Development. “One season He is like, ‘Leave Korn, raise your daughter and minister to My Bride, the church.’ And just like Him, He throws a curveball, and He’s like, ‘I’m going to throw you back into your band.’” 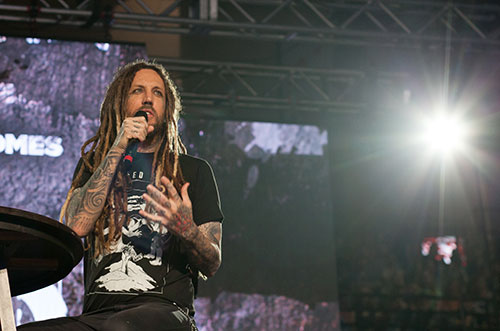 Korn has sold over 40 million albums and garnered numerous awards, including MTV Music Awards. Since his salvation, Welch has become a renowned public speaker and New York Times best-selling author.

Before speaking, clips of Welch’s IAMSECOND testimony explained how the rocker had been saved by grace as his life unraveled in a haze of addiction to hard drugs and other worldly pursuits. After realizing that nothing, not even realizing his dream of becoming a worldwide rock star, could bring him fulfillment, Welch found it in Jesus.

“I am 100 percent all or nothing,” Welch said after the video played. “I was all into the drugs, I was all into wanting to be famous … but when I met Jesus, it was like, ‘I am all in.’ I was like, ‘I want You so bad. Tell me how intimately can a human be with you,’ because my heart had been shattered over and over with heartbreaks and personal failures. And I just needed (Jesus’ love).”

Tattooed and dreadlocked, Welch’s physical appearance was overshadowed by the joy of the Lord beaming from his face as he spoke in an upbeat, energetic manner with humor saturating his message.

Welch updated the crowd on his life since his transformation almost a decade ago, when he abandoned the life he knew to focus on raising his daughter and growing in Christ. He eventually started his own band which brought him to reunite with his former bandmates, with whom he had been friends since childhood. An on-stage reunion at a festival brought many to tears, prompting the band to invite him to rejoin.

But Welch refused, adamantly, for some time.

“The next thing you know,” he said, “I felt the Lord impress on me, ‘You are following Me, follow Me back there.’ I resisted at first but I got some counsel, I prayed, and through a series of events, I knew it was my calling. And He has confirmed it over and over.”

Welch explained that the touring atmosphere has changed with many of the band members now in more mature stages of life. Drugs and other temptations are kept away. At least one other member follows Jesus; Welch said the rest are more open than in the past and say they believe in God.

While on tour, Welch invites dozens of fans after each show to meet him. He shares his testimony and takes photos with them before allowing some evangelist friends he brings along to speak as well.

Welch explained that because he can relate to his fans and the hostility many of them have toward religion, he is given a unique platform. He said he has seen people find sobriety and still appear empty.

“You don’t have to be sober with no life,” he said, “you can be high on God’s love — it is so real. It is so beautiful to see people come to life … I live for that, to see people getting touched by God.”

There is a lot of pain and rage in the rock ‘n’ roll scene, Welch explained, saying that even as he grew as a Christian, he grappled with his past self. His daughter grew to have similar issues, leading to parenting struggles for Welch, which he shared in his latest book, “With My Eyes Wide Open.” Just as he and his daughter had to, Welch encouraged Liberty’s students to face their pain and come to God on their own terms.

“Deal with your pain head on … Have someone help you talk about the past hurts … it is really so beneficial.”

When religion replaces Jesus, Welch said Christians can drive people away from the Gospel. With that in mind, he challenged the crowd to live authentically.

“We all deserve the truth,” he said. “Let’s get real. … It is great to talk about these things that we go through because it is real life. … People want real, so get out there and be real to this world, you guys.”

In closing, Welch prayed over the students, particularly those who were struggling, before Nasser prayed for him.