Screenwriter donates trophy and hat from iconic movie to Snowflex 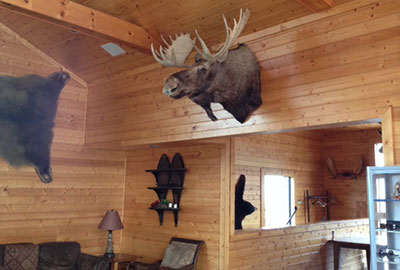 Dan Gordon, a Hollywood screenwriter/director known for “The Hurricane,” “Highway to Heaven,” and “Wyatt Earp,” gifted a massive hunting trophy along with a hat worn by actor Sam Elliott on the set of the film “Tombstone” to Liberty University for display in the Barrick-Falwell Lodge at Liberty Mountain Snowflex Centre.

Gordon has visited campus a number of times, often sharing his industry expertise with students of the Cinematic Arts, Zaki Gordon Center, which was named after his late son.

The trophy is a massive bull moose head, dubbed “Bullwinkle,” which Gordon harvested in Alaska in 1986. It is currently on display in the lodge, along with a large collection of North American wildlife trophies harvested and donated to Liberty by longtime university supporter Dr. Al Barrick.

Elliott played Virgil Earp in the 1993 film “Tombstone,” which was released a year before the Gordon-penned screenplay “Wyatt Earp” hit theaters. Gordon also donated a few other cowboy hats worn by late family members, including Zaki Gordon, which will be hung on the moose’s antlers. An identifying plaque will also be hung.