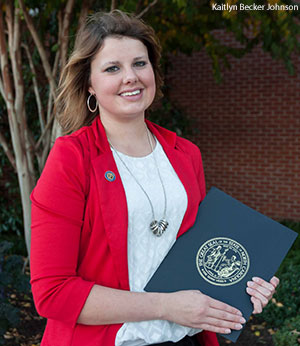 In addition to serving in the soup kitchen, Ireland also spearheaded the organization’s bag lunch initiative. Since the kitchen is not open on Fridays, she organized a program to put together bagged lunches for people to take with them on Thursdays.

Ireland said that she sees service to others as a lifelong calling.

“I feel that giving back is a huge thing, and we are supposed to do this as Christians because God has given us so much,” she said. “I want to reflect Jesus in my service to others for the rest of my life.”

Ireland, who is studying developmental psychology at Liberty, first gained the attention of the governor after winning the 2014 United Way Giving From the Heart Award in recognition for collecting 1,500 hygiene products, including soap, deodorant, and shampoo, for the homeless in her area. The United Way awarded her $500, which she donated back to the Corner Table.