A Liberty University-owned hotel on Candlers Mountain Road was recently remodeled and officially became the Fairfield Inn & Suites on Monday, May 18.

Formerly the Wingate by Wyndham, the hotel received a complete exterior and interior renovation. The work was overseen by Liberty’s Department of Planning & Construction and by Construction Management Associates (CMA). The renovation was completed in phases from August 2014 through the first week of May. A majority of the rooms were open to guests during the renovation.

Liberty hired a contractor who specializes in hotel construction for the project, and Liberty’s Grounds Department did the landscaping.

Enhancements consisted of all new furniture and appliances throughout the 129 rooms and three meeting rooms. Other updates included a new roof, a new patio area with a fire pit, a remodeled lobby and breakfast area, upgraded Wi-Fi, wireless key access for rooms, and a convenience store. The pool area also received extensive upgrades.

Planners took special care in customizing areas for Liberty guests. Nine rooms were designed specifically for Liberty students who study online and visit campus for one- and two-week intensive courses. These rooms have a study area with a desk large enough for four people to work at, and they also include a freezer and refrigerator.

Becky Aleman, general manager, said that the new upgrades will make the hotel an attractive option for visitors to Liberty and the Lynchburg area.

“Quality and excellence are two words that come to mind when I think of Liberty University and the Fairfield Inn & Suites brand,” she said. “It makes perfect sense that we would expect to see more guests traveling to and through our area and choosing to stay with us as Liberty continues to grow.”

Liberty purchased the hotel in June 2012 in a foreclosure auction for $9.2 million. Since then, the university has been investing resources into the property to improve the guest experience and ensure that it remains one of the top-performing hotels in the region. 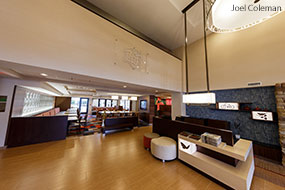 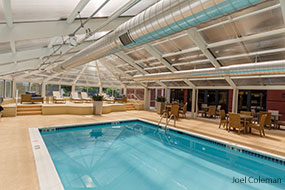