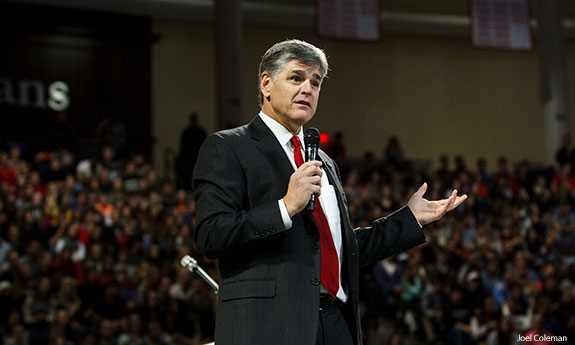 Calling upon Liberty University students in Wednesday’s Convocation, FOX News personality and radio host Sean Hannity issued a challenge for “the future leaders of America,” to “dig deep” within themselves, to find their passion and channel it through their faith in order to alter the destructive course that our country is on.

He reminded the crowd of the impact that a vision can have, such as that of his friend Dr. Jerry Falwell, Liberty’s founder, whose ambition fueled the growth of what is now the world’s largest Christian university.

“It is amazing to see this campus grow as much as it has,” said Hannity, who last visited campus in 2007. “This was Dr. Falwell’s dream … you are all a part of it. The university has grown by leaps and bounds; it is really an honor to be here.”

President Jerry Falwell introduced Hannity, expressing his appreciation for his stance on conservative values in the media. Hannity, one of the most well-known conservative voices today, hosts a weekday television show on FOX News, and his radio show is No. 2 in the nation.

The students were also greeted by another guest, John Luke Robertson of TV’s “Duck Dynasty,” who will join them as a fellow student this fall. Robertson, 19, briefly talked about how he has purposed to put action behind his faith.

America’s future is being threatened, Hannity said in his speeach, by a declining economy, rising national debt, and the surge of terrorism.

“For the first time in American history, because of bad policy and politics … we may leave this country worse off … than the country that we inherited,” he said. “We are handing you off a bad world that is very difficult — bad economic problems, worldwide terrorism, a lack of leadership — and the country is craving whatever talent God gave you.”

But hope is not lost, as long as good people stand for what is right.

Hannity witnessed this firsthand after the terror attacks of 9/11 when first responders, politicians, businesses, and countless others provided supplies and support to those impacted.

“You saw the best in humanity after some of the worst evil we have seen in modern history,” Hannity said.

It is that goodness that can transform the world, he said. The process begins in the individual, when you allow God “to come into your heart and guide you.”

Hannity said that as society ignores its responsibility to fight the evil and solve the problems that threaten it, those who wish to do something about it must be bold. He said Liberty students have an educational and spiritual foundation like no other that has prepared them to make a difference.

“The world needs your leadership,” Hannity told them. “You are in a position to give it because of where you are, what you know, what you believe in, and your belief in a God that is more powerful than any force on this earth.”

He challenged students to be bold enough not to bow when adversity strikes. 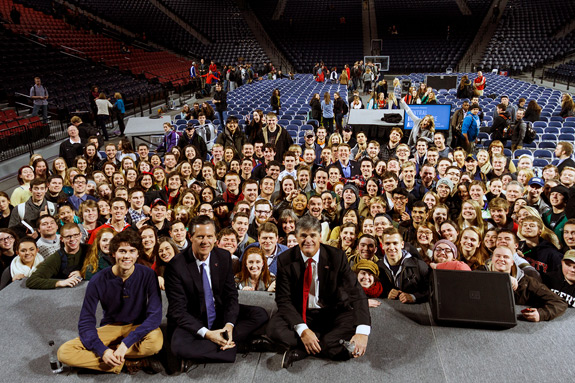