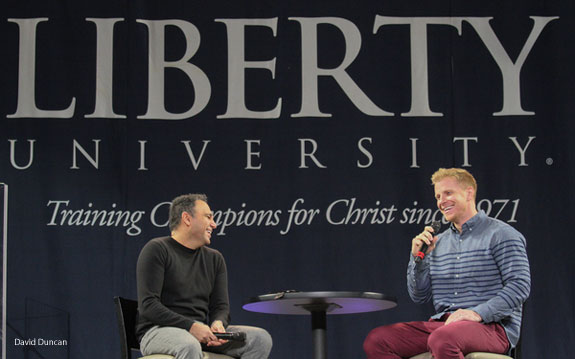 Reality television star Sean Lowe visited Liberty University’s Convocation on Monday to share his experiences on ABC’s “The Bachelor” and “The Bachelorette.” Fielding questions from Senior Vice President for Spiritual Development David Nasser, Lowe revealed a behind-the-scenes look into his life in front of the camera.

In 2012, Lowe was a contestant pursuing Emily Maynard during Season 8 of “The Bachelorette.”

“I walked into it a little naïve,” said Lowe, who was selling insurance when he received the call to audition — a decision he made more for the opportunity to take an all-paid-for vacation than to find a mate or to find fame on TV. “I was just trying to be me. I was at least smart enough to know if I’m going to walk into this world that doesn’t really create a healthy environment (and) it’s not going to nurture my spiritual life, then I needed to go into it grounded. I needed to go into it with a game plan.”

While staying in the show’s mansion that season, Lowe said he had personal devotional times each morning on the patio. Some of the men became curious about his daily habits, he said, and soon 10-12 men were joining him.

“Some of these guys had never even heard the Gospel,” Lowe said. “So I thought, ‘This is why I’m here. This is why God put me on this crazy show, to share my faith.’”

Students cheered after Lowe announced a close friend of his on the show began reading a devotional Lowe sent him and came to know the Lord.

Although Lowe said he felt confident about his place in Maynard’s heart, he was sent packing when he was one of three men left on the show. A few short months later, the show’s producer asked him if he would consider being on “The Bachelor.” In 2013, he starred as The Bachelor in ABC’s 17th season.

“I told myself, I’m just going to be me and being me means putting God first and living an honorable life,” Lowe said.

According to the New York Times, Lowe’s season as The Bachelor regained viewers for the show and he was quickly deemed “America’s Favorite Bachelor.” During the season, Lowe met his future bride, Catherine Giudici Lowe, and their wedding was televised in the same season, drawing 6 million viewers.

Lowe also spoke about being labeled as “the virgin bachelor” by the media after the pair revealed they were waiting for marriage. Lowe said he hated the stereotyping, not because he was ashamed, but because the world would have you think you’re an outsider for taking that stance.

“That’s just a part of being faithful,” Lowe said. “I wanted to try my best to live in God’s blessing, and being faithful sexually is just one aspect of that. It’s been an incredible opportunity for me to share God’s love with the world.”

Since starring on “The Bachelor,” Lowe returned to ABC to claim a spot on “Dancing with the Stars,” where he took sixth place. Lowe has also written a book titled “For the Right Reasons,” which delves more into the struggles he had on television and the keys to pursuing purity. (A book signing for students was planned, but it was canceled due to inclement weather.)

Although Lowe has been on camera in front of millions of viewers, he admitted that Convocation at Liberty — the largest weekly gathering of college students in the world — was a much larger crowd than he had ever addressed in person.

“I was really humbled to be invited,” Lowe said. “I couldn’t pass this up, to talk to an arena full of Christian students. It’s just incredible.”