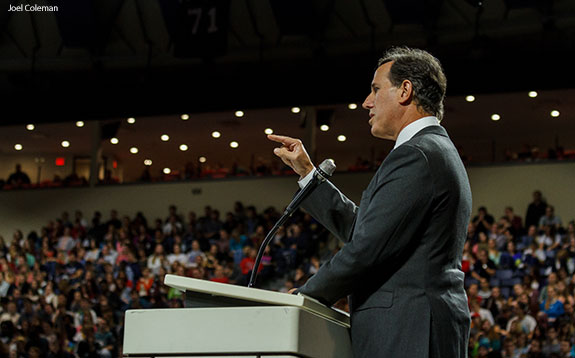 Rick Santorum, the one-time presidential candidate, took the stage at Liberty University’s Convocation on Monday to emphasize the important role that America plays in shaping the world. In order for this influence to continue, he added, it is imperative that Americans remain grounded in morality.

Santorum is an attorney and former Pennsylvania U.S. Senator and Congressman. He was a Republican candidate for the U.S. presidency in 2012. Currently, Santorum serves as CEO of EchoLight Studios, which produces and distributes high quality movies for faith-based and family audiences. He is also a New York Times best-selling author.

“More than anything else,” Nasser said, “he is a man who champions conservative values and, more importantly, Christian values. He is a true pro-life candidate, and he goes even further than that … he is a whole-life candidate. I see the compassion that he has in the way he waves a flag for what is right.”

Santorum began his message by emphasizing the importance of faith in both dealing with life’s hardships and making sound judgments. He said that faith has grounded America throughout its history, helping it rise to become an influential force for good in the world. This foundation is spelled out in the Declaration of Independence, which states, “That all men are created equal, that they are endowed by their Creator with certain unalienable Rights (sic), that among these are Life, Liberty and the pursuit of Happiness.”

“We are the only country in the history of the world that believes rights come to each and every one of you because you are a creation of a loving God,” Santorum said. “No other country has a credo that says, ‘You are the holder of rights and the government’s job is not to give you rights, but to protect the rights that you have.’”

It is because of this foundation, Santorum explained, that America became a global force for justice in the world.

Santorum explained that while some believe religion is the origin of hate and violence, it is actually unbridled human ambition that leads to death and destruction, while adherence to a higher standard leads to peace and harmony.

To protect the rights of all, said Santorum, we must begin by truthfully identifying evil and then confronting it.

Furthermore, to swiftly and justly handle threats, according to Santorum, the military needs to be able to identify a winning strategy and devote the time and resources needed to accomplish it, something that he said has not been the case in the current administration.

“There are no easy victories, particularly when lives are on the line,” Santorum said. “I believe in limited government, but I do not believe in small government in the areas where government is the only one to do the job. In the case of national security, we need a robust and strong military.”

Santorum warned that America’s spiritual foundation is under assault, both by evil forces abroad and by a secular agenda within our borders. Because of this, the boldness to confront evil is diminishing.

He pointed to the threat of radical Islam overseas, explaining that the past two presidents have failed to honestly identify the issue.

“Let me just be clear, I am not saying that all Muslims are terrorists, nor do I say that all Muslims support terrorism,” Santorum said. “But we have an obligation to face the truth about who the enemy is and what they want to accomplish to have any chance of defeating them.”

Locally, Santorum pointed to secularism as a catalyst for moral complacency, which will ultimately lead to decline.

“Western Civilization, as it becomes more secular, has and will become more insular, and much more willing to tolerate and compromise with evil.”

He said that it is imperative that America pushes back against assaults on religious liberty now. America must maintain its “ability to be able to stand up and fight for good, to be that symbol, that beacon of hope of goodness and morality, standing for God and His laws to the rest of the world.”

With that in mind, Santorum charged the crowd to “take that fire that I know is here. Nurture it. Understand it. Be smart. Understand your religious liberties; understand what it means.”

By being knowledgeable, he said, students can intellectually engage controversial ideas and help set America back on the correct course.

“We need you not just to support each other, but to be evangelicals, yes for the faith, but just as importantly for what makes the faith alive here in this country, and that is the doctrine of religious liberty.”