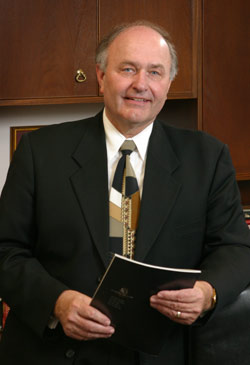 Rist was an anchor in the academics of Liberty for much of his adult life. He joined the university in 1973. He has served as a distinguished professor of history, Chair of the division of Social Sciences, Associate Dean and Dean of the College of Arts and Sciences, Dean of the Faculty, Vice President for Academic Affairs, and Provost. In November 2010, he was named Provost Emeritus and was appointed to the position of Senior Academic Consultant to the Provost. He retired from full-time employment at the university at the end of the 2012-13 academic year and was honored by the university at its annual Years of Service Banquet last July.

“Boyd Rist was my history professor at Liberty in the early 1980s. His classes challenged me academically and were pivotal in preparing me for law school,” said President Jerry Falwell. “Not only was Boyd Rist an excellent professor and later a personal friend, but he also played a key role as Provost in shaping Liberty into a world-class university. He will be greatly missed. On behalf of his Liberty family, I offer our condolences and prayers during this difficult time.”

Rist is survived by his wife, Norma Jean, and daughter, Emily Ruth.

A visitation will be held at noon on Friday in Pate Chapel at Thomas Road Baptist Church, followed by a funeral service at 1 p.m.