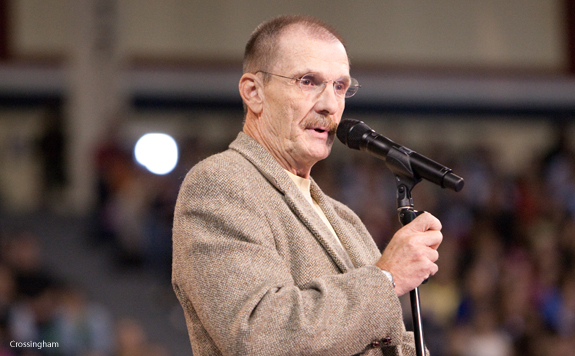 McAllister, 63, has been working with teenagers and young adults for 41 years. He has spoken to millions through television and radio and at conferences. He has sold more than 1 million copies of his books and youth manuals.

McAllister started his radio talk show, “Dawson McAllister Live,” in 1990. For 15 years it was broadcast solely over Christian radio. In 2005, Dawson switched to Top 40 mainstream radio where he has experienced great success and is now broadcast on Sunday nights in 80 percent of the country. Through this market he is further able to reach young people “going lock-step to hell.”

McAllister expressed to LU students his heart for their generation. “There has never been a generation in bigger trouble than yours,” he said.

McAllister played four clips throughout his talk that combined segments from his show, along with current Top 40 songs. The students were able to hear what McAllister meant when he said, “Your generation is absolutely desperate.”

He said teenagers and young adults today are struggling with major addictions — the biggest one being relationships. They are afraid to be alone, he said. Also, one in three teenagers have suicidal tendencies and one in six attempt suicide. One in three girls will be abused by the time they are 18, he said.

He told stories about callers to his show who faced painful break-ups, broken families, abuse, depressions, addictions and more. He then talked about the HopeLine — a place where teens and young adults can seek counsel off the air with someone who can provide compassion and godly advice. McAllister invited students and their parents to sign up to answer HopeLine calls on Sunday nights.

McAllister also talked about the lie that young people believe: that there’s no consequences to their actions. But McAllister said he hears about the consequences all the time, and he has a huge heart for helping this generation. He encouraged everyone to join him in the battle for souls.

“It’s time we go to our dying youth culture as we get ready to see the end of the world as we know it, as tens of millions of your peers are in lock-step going to hell,” he said. He prayed for Christians to be active in evangelism: “God, move us … help us to live it out.”