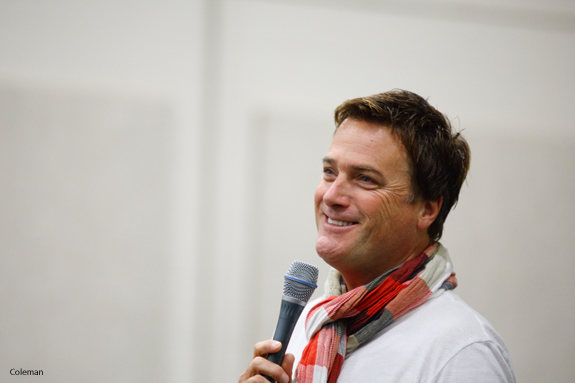 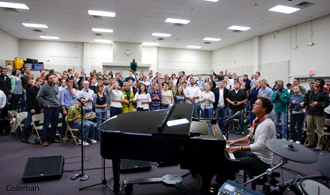 Smith, a Grammy and Dove award-winning artist, met with aspiring musicians and worship leaders in a casual question-and-answer session, kicked off by playing some impromptu songs requested by students.

A 200-member choir from the Center for Worship also rehearsed with Smith later in the day to join him on the TRBC stage that night.

Students asked him everything from the times he was asked to perform at the White House (Smith said he was friends with the Bush family and had been there a few times, even having a hotdog lunch in the Oval Office) to how he goes about writing songs to when he felt called to do music as a ministry.

Smith, who has had a successful traveling artist career, with 28 number one songs and career sales over 10 million, has also served as a church worship leader at his church near Nashville, Tenn. He told students who wanted to be recording artists that “it’s all about the song. You get a song that can change the world, that people will sing, that’s key. (And) the big one is accountability — surround yourself with great people, 'cause this business will take you down. You just have to raise the bar.”

He advised worship students to learn to “disappear” when they’re leading worship, to let God be at the center and to do it all "with humility."

Smith was last at Liberty University the weekend before its founder, Dr. Jerry Falwell, passed away. He has had ties with Liberty for a long time, though.

“I love it. I have a lot of friends who went to school here. It’s kind of good to come to a place where [you hear] it’s probably the most talked about campus, really. And I work with a lot of those people, which is great.”

Class of 2005 alumnus Meredith Andrews is now on tour with Michael W. Smith and also took some time to speak with current students at the Center for Worship’s ministry convocation Friday morning.