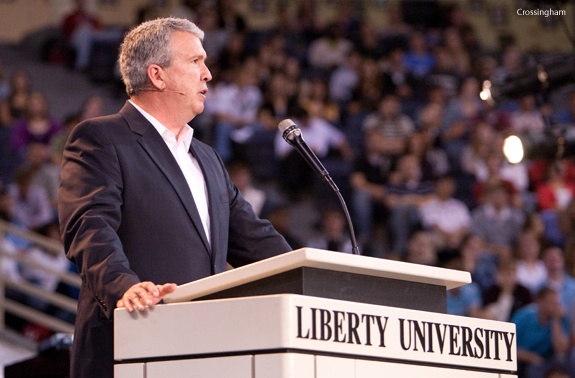 At Liberty University, where the mission is to “Train Champions for Christ,” students have opportunities to get involved in missions work locally and abroad. Many students hear about those opportunities, and hear God’s call on their life, during the annual Missions Emphasis Week (MEW), which kicked off today.

“As a direct result of Liberty’s annual missions week, millions of people around the world have had an opportunity to hear the Gospel of Christ,” said Campus Pastor Johnnie Moore. “We believe that this week could be the week that God inspires some student to do something extraordinary in his or her generation. Our ambition is nothing less than that everyone on Earth might be touched by Christ through a Liberty life.”

This week, students can connect with many missions organizations at an information fair in the back hallway of Demoss, where representatives have set up booths displaying their work and will be available to speak with students. Missions seminars have also been planned, focusing on tribal ministry and the Muslim perception of Christianity, among other subjects. (Students and faculty and staff can view a on the login page.) Students also have the opportunity to have lunch with missionaries in the Reber-Thomas Dining Hall.

Kicking off the week at Monday’s convocation was Dr. Kirk Nowery, Chief Operations Officer of Samaritan’s Purse, the non-denominational evangelical ministry headed by Franklin Graham that provides emergency disaster relief to impoverished areas around the world.

Nowery, a Liberty University graduate, first asked the student body, “What is the calling of God for your life?” then spoke about the time he received the call of God on his own life.

Nowery was at Liberty and had asked Dr. Jerry Falwell, Sr. how he could know what God’s will was for his life. Falwell opened his Bible to Psalm 126:5-6, they read the passage and then Falwell put both of his hands on Nowery’s shoulders and said, “Kirk, you ought to be a young champion for Christ capturing one of America’s great cities for Him. ... Remember, faithful is He who has called you, who also will do it.”

He then challenged the students to live a life that is truly marked by surrender — listening to God, keeping their promises and surrendering their lives to God’s will.

Missions Emphasis Week will continue through Wednesday when the president of the International Mission Board, Jerry Rankin, is scheduled to speak in convocation.

As a missionary, Rankin planted churches among the Indonesian people for more than a decade before taking on a leadership role. After serving overseas for 23 years, he became IMB’s 10th president in 1993 and has plans to retire as president next year.

He has authored or co-authored several books, including “A Journey of Faith and Sacrifice: Retracing the Steps of Lottie Moon;” “Empowering Kingdom Growth to the Ends of the Earth;” “Lives Given, Not Taken;” and “Spiritual Warfare: The Battle for God’s Glory.”