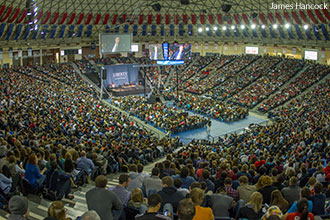 Liberty’s Convocation is North America’s largest weekly gathering of Christian young people. It is held three times a week in the Vines Center. Students are able to hear from prominent speakers of national/global significance from every sphere of society. Speakers challenge, motivate, and inspire students as they share their stories and impart wisdom from experience in their respective fields.

Services are aired on the Liberty Channel and past Convocations can be viewed on www.Liberty.edu/Streaming and Liberty’s YouTube channel.