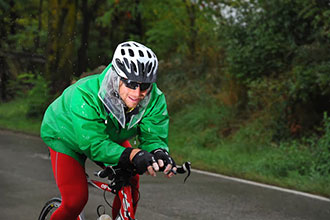 Only certain individuals have the stamina to run a marathon. Fewer still can run a marathon after completing a 2.36-mile swim and a 111.84-mile bike ride in one day — an Ironman. But this month alumnus Jaime Azuaje (’12), a former member of Liberty University’s triathlon team, did what only seven others in the world have ever done. He completed the first-ever Triple Deca Ironman: 30 Ironman races in 30 days.

“The first 10 were incredibly hard,” Azuaje said. “(By race) 10-15 (they) were getting better. About 15-25, I am not going to say it was easy, but our bodies were used to it. Our bodies were just going through the motions. The last five days, it got hard again with rain, and it was so cold.”

The event took place in Lonato, Italy, Sept. 8-Oct. 8. At age 26, Azuaje was the youngest person to accomplish the feat. The task was so difficult, of the 31 people who signed up for the full Triple Deca (several others participated for shorter distances or fewer days), only eight made it to Day 12. Those eight went on to complete the challenge.

Prior to the Triple Deca, no one had ever completed more than 11 consecutive Ironmans, making each daily finish after 11 a new world record for the competitors. Based on cumulative time, Azuaje finished seventh. But as he said the other competitors put it, he finished “seventh out of the world.”

Azuaje and his wife, Heather (’10), who played on Liberty’s soccer team, live in Colorado Springs, Colo., where they enjoy traversing the rugged terrain. The couple has a knack for adventure and both are avid runners. 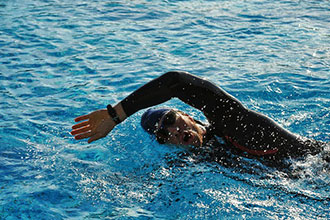 The couple has a passion for missions, international sports, and youth ministry, in particular. They go on an annual missions trip and plan to become full-time missionaries in a few years. They hope to minister in some of the world’s most difficult-to-reach places. Jaime Azuaje, who earned a biblical studies degree, said their love for endurance sports — like running, rock climbing, and hiking — will come in handy.

Jaime Azuaje said Dr. David Horton, a Liberty professor, mentored him while he was a student. Horton is known for his ultra-running and for putting on extreme running events in the Lynchburg, Va., area, including the 50-mile Mountain Masochist Trail Race (MMTR). The Azuajes regularly come back to their alma mater to participate in these events and will be in Lynchburg for the MMTR on Nov. 2.

It was at last year’s MMTR where Jaime Azuaje first heard about the Triple Deca, though he did not believe it was feasible for him to even enter. To his surprise, Heather Azuaje not only supported the idea, she spurred him to tackle the daunting task.

As he researched the race, he noticed a theme among many of the potential competitors.

Thanks to tremendous support from friends and family, Jaime Azuaje was able to register before the deadline.

The course was rather short and had to be done in loops so the competitors were never too far from proper medical help, food, and supplies. The extreme nature of the race necessitated personnel on hand to monitor the athletes and make sure they were properly fueled, hydrated, and cared for.

Each morning at 7:30, Azuaje and the other competitors would swim 76 laps in a cold pool — which felt near freezing on days with poor weather — before hopping on a bike to complete 30 laps. The race concluded with the run, 54 laps around a park.

Azuaje faced a number of challenges. On Day One, he realized his bike was not ideal for the course. This caused him to finish hours later than anticipated and in turn lose out on valuable rest that night. He proceeded to use about five other bicycles, some he borrowed and one he was thankfully able to rent, before his wife was able to deliver another bike. It became a joke among the competitors that Azuaje was trying to set a record for most bikes used during the event.

Because of these troubles, Azuaje struggled through the first 10 days, battling extreme fatigue. He would often find himself almost dozing off as he biked or ran. All of the competitors were battling malnutrition as their bodies adapted to the rigorous routine. This compounded Azuaje’s exhaustion and chipped away at his resolve.

“I did not do well at the beginning. I (thought) if I could just make it to 11, Heather would be here and she would tell me I could quit,” he said.

Despite feeling the urge to give up, Azuaje endured. And by the time his wife got there (a day later than he expected) his body had adjusted.

“When she got there on Day 12, I felt more energized. It was so incredible (to have her there),” he said. “She helped me out and saved me so much time. It is nice to be handed food by someone you love. It was super energizing.”

The races seemed to progressively get easier and Azuaje’s confidence returned.

Were it not for the early troubles, Azuaje said he might not have finished the race. While many competitors depleted themselves during the first few days trying to finish as fast as possible, Azuaje’s slower times, though somewhat forced, enabled his body to adapt to the course.

Of all the struggles he faced, Azuaje said the greatest challenge was the course itself.

“Just thinking about it is awful. We had to run along this fence in the park. It felt like prison. I thought to myself, ‘this is how inmates have to run,’” he said. “We went in and out of bodily pain (but) the mental part of it, doing the same thing, the same course, over and over was so difficult.”

He said the most rewarding aspect of the race was gaining the respect of his fellow competitors, many who told him they were encouraged by his positive attitude in the most adverse situations.

“I went to meet these international athletes, and make new friends, and eventually share my life with them and share Christ with them,” Azuaje said.

Though he felt discouraged inside, his competitors said they saw Azuaje display courage and joy, something he credits to God alone.

“God put this light outside, even though I was hurting and tired, God was putting himself out in front,” he said. “It was God’s strength, there was no way I should have been able to finish it.”

Azuaje plans to continue testing his physical limits, although not with another Triple Deca but rather exploring God’s vast creation with his wife.

“We are going to bike across America … hike the Appalachian Trail. We just want to see beautiful things, (especially) while we are still young.”