On Friday, for the first time ever, Liberty University students led the National March for Life in Washington, D.C., holding the march banner and displaying to the world the heart that the university has always had for the unborn.

Over 500 students departed campus on Liberty buses at 5 a.m., excited to be part of the first March for Life in a post-Roe America.

“With how many people are going here, it just shows the passion we have for God’s people and for the unborn and for standing up for what we believe in,” said freshman Noah Collazo as he stood in line to board his bus. “It’s definitely cool seeing all these people so early in the morning — so many of us showing up to stand for what we believe in.”

Junior Jesse Hughes said he was in Washington, D.C., when the Supreme Court overturned Roe v. Wade in June, so being back for the march was special for him.

“There’s still a lot of work left to do in the states … there’s also work to do to help women, help mothers, help babies both born and unborn who need the help that a pro-life community can provide,” he said. “It’s great to see that the pro-life community isn’t just stopping at ‘Oh Roe is overturned, so now we can just all go home.’ No, there’s still so much work left to do, and it’s great to see that people are recognizing that and that we’re coming together to continue marching until we live in an America where abortion is unthinkable.” 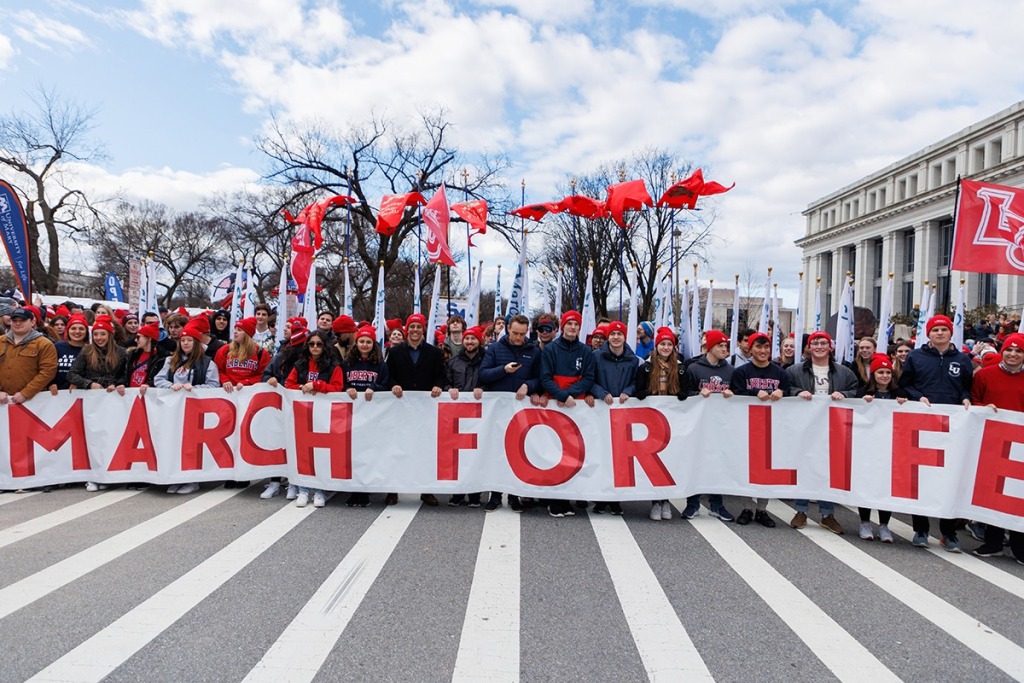 Senior Riley Ares said Liberty’s increased involvement in the march this year was an example to the world “of what it means to be a voice for the voiceless.”

“God wants us to come to Him with prayer, but He has also gifted us with a country and a Constitution that lets us speak up for the issues we care about,” Ares said. “The March for Life is an opportunity to act on what God has called us to as well as utilize the resources He’s given us in this nation under God.”

The students attended the March for Life Rally at noon on the National Mall and enjoyed pre-rally music and entertainment featuring the band We Are Messengers. 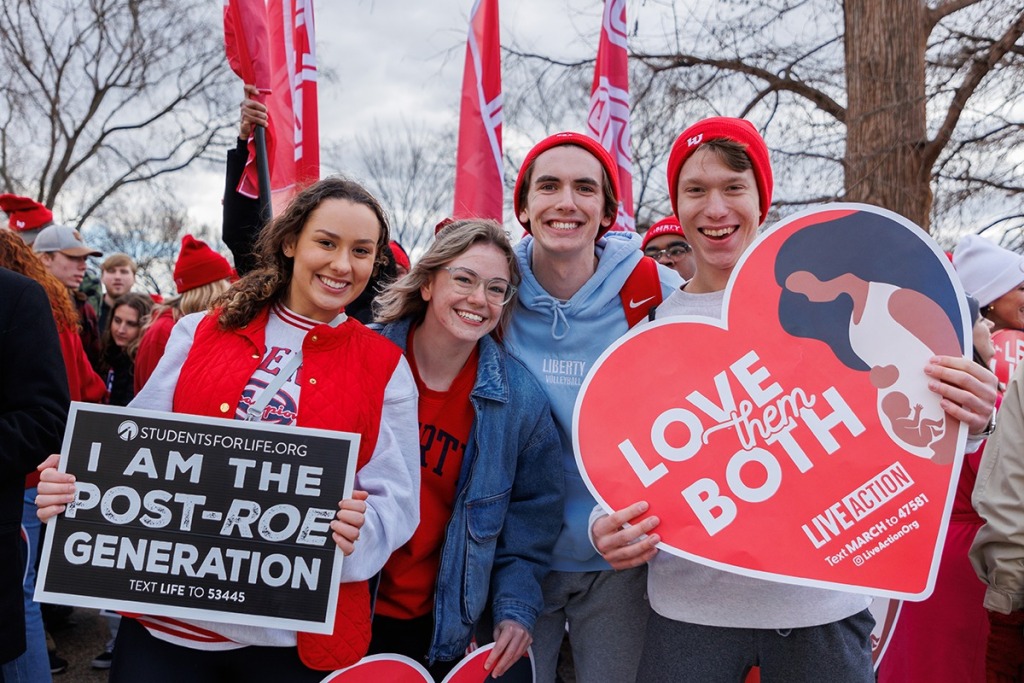 This year, march organizers approached Liberty about selecting a student to speak at the rally. Junior music student Summer Smith, president of the Students for Life club at Liberty, took the stage among an impressive lineup of pro-life leaders, including the Rev. Franklin Graham, Tony and Lauren Dungy, and actor Jonathan Roumie (Jesus in “The Chosen.”)

Smith addressed the pro-life generation, sharing how her decision to participate in the march, and her passion to fight for the unborn, is a personal one. She found out while she was in high school that her mom had had an abortion as a teenager.

“My mom was an 18-year-old senior about to graduate when she found out she was pregnant, and like most women in her situation, didn’t feel prepared or ready to have a child. … It’s a very hard and scary situation and instead of feeling safe enough to reach out for support, my mom felt afraid and alone. And the reason I am pro-life is because I don’t want anyone to have to go through what my mother went through, and that is why I march today.”

Smith stirred the audience to action with advice for the younger generation to get involved in the pro-life movement, from using their social media accounts to speaking up about abortion with family, friends, and on campus. 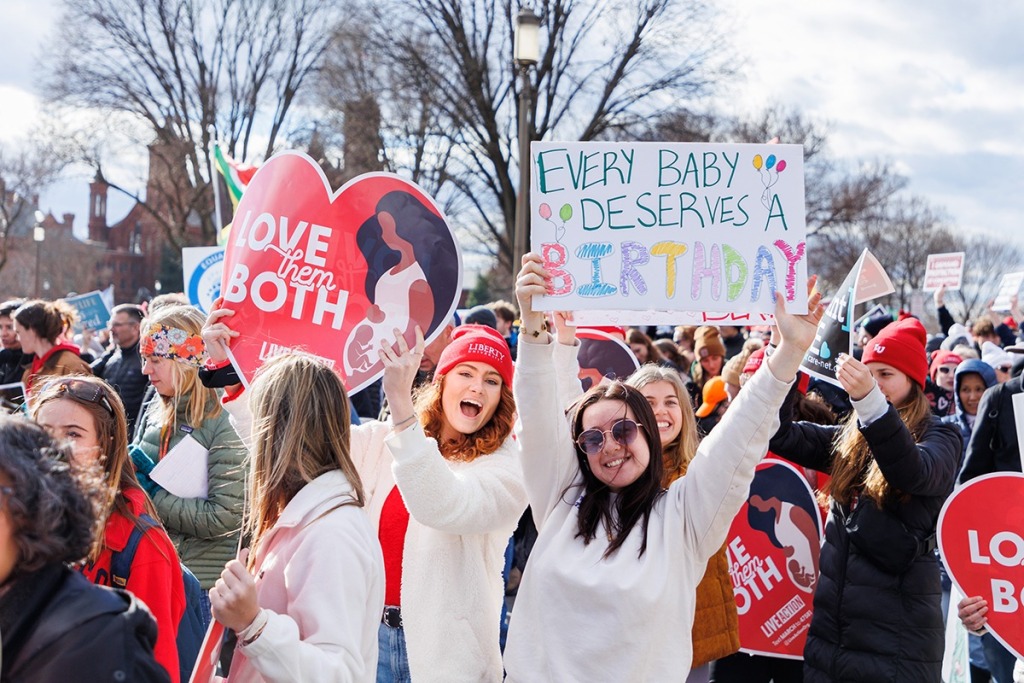 “We only have one life on this earth. One chance to end abortion. One chance to support women like my mom,” she concluded. “I encourage you to stand courageously for truth in love, to see innocent lives protected and to see abortion abolished in our lifetime.”

The Liberty students, all wearing red beanies provided by Liberty’s Standing for Freedom Center, which organized the trip along with the LU Send office, then began to line up at the start of the march, between 12th and 14th Streets, and led over 50,000 participants down Constitution Avenue and to the steps of the U.S. Capitol Building. The students were joined by Liberty University School of Law Dean Morse Tan.

“I think God is moving around the world, and this is just an amazing experience,” said nursing student Katherine Conskca. “I think this is a big step (for Liberty). Not only are we leading the march, but as a Christian university I believe it is important to be at events like this.” 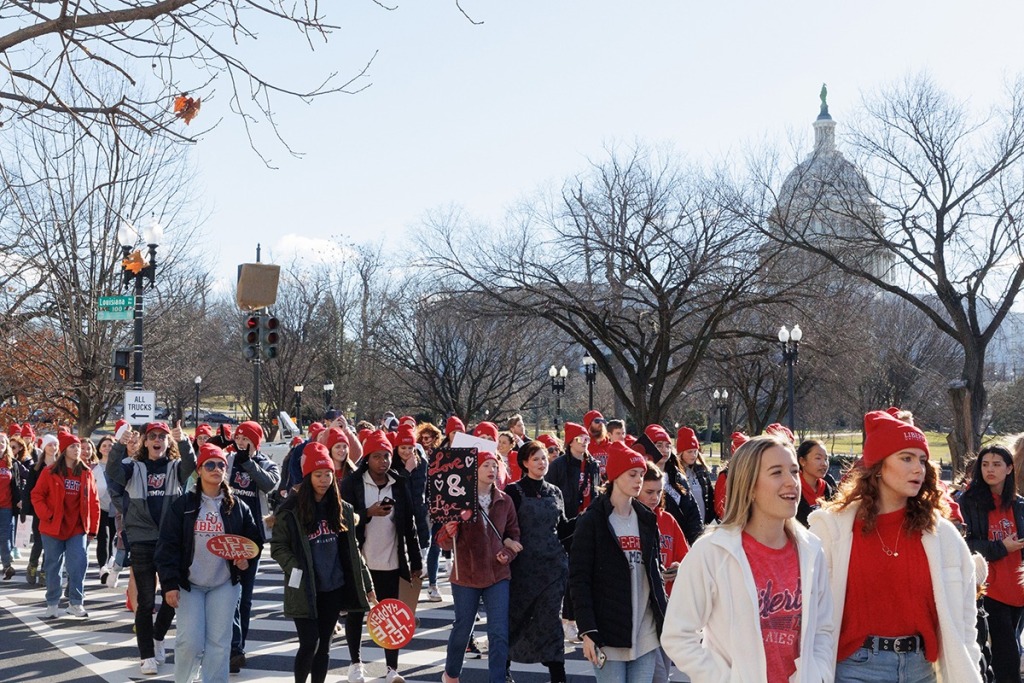 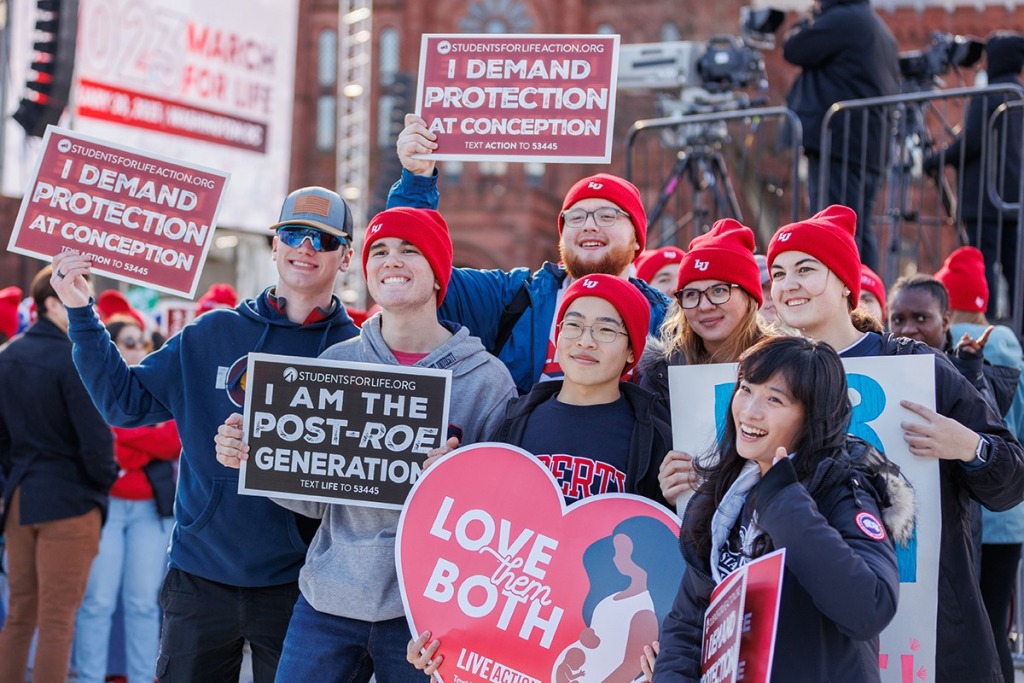 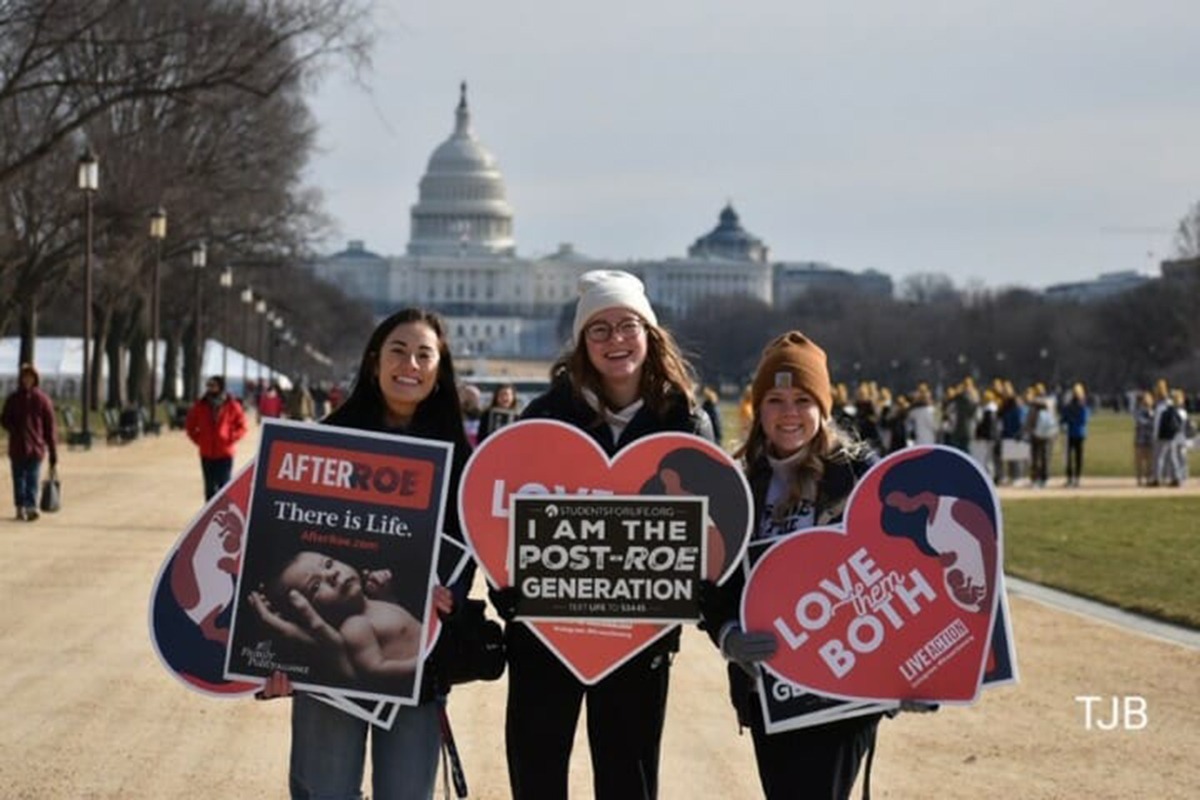 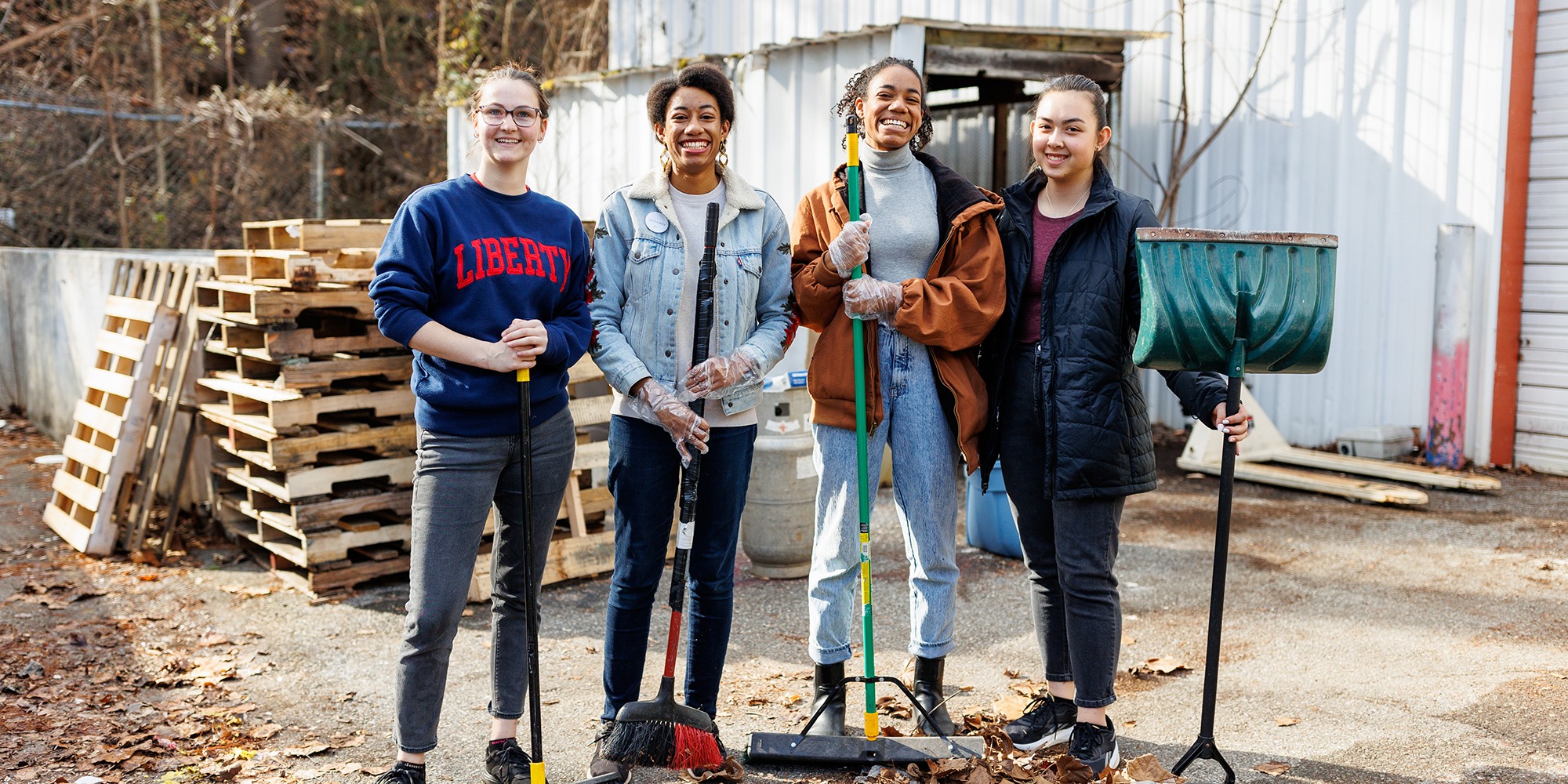