The show’s “Into the Depths” feature won for the Religion – Program Feature/Segment category.

The NATAS Emmy Award is the industry’s benchmark for the recognition of television excellence and recognizes talent from the Maryland, Virginia and Washington, D.C., television community.

The feature, originally broadcast on Oct. 10, tells the story of loss and faith in the life of Lauren Chennault, a member of Liberty’s Swimming & Diving team and an aeronautics student whose life was altered by the loss of her father at the age of 16 from suicide.

“The segment speaks to the personal strength of Lauren and the fact that she went through what she did with losing her father, but it also speaks to the strength of her faith and how important it was in helping her find a new purpose in diving, the School of Aeronautics, and what she wants her future to look like,” said anchor Matt Warner, who voiced the segment. “It’s certainly exciting that that story got out there to so many more people and has a bigger platform now with the Emmy award.”

Jonah Jabbour was honored at the Emmys as the segment’s producer.

“Jonah really has a knack for telling powerful and emotional stories, and this is the third award he’s won now for a feature he’s produced,” said Warner. “We’re excited for him and for our whole team because a lot of people had a hand in making that story turn out so well.” 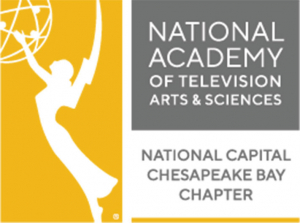 Warner said while the show’s continued success at the Emmys proves its quality in storytelling and production, it also highlights Liberty’s success on a larger scale.

“It shows that the work we’re doing is at an extremely high level … and to have continued success like this points back to the level of our work, and at the same time it motivates us because we want to keep having success,” Warner said. “We want to keep pushing the envelope and do better and better. We’re super excited that we can show people what Liberty is all about through our stories and point to Liberty, but more importantly point people to God and show how important faith is to these athletes.”

In addition to the feature on Chennault, “Game On” received Emmy nominations for “A Life Transformed,” about Flames women’s basketball standout Tatyana Crowder and how a relationship with Christ transformed her from an troubled youth to one of Liberty’s prominent student athletes, and “Training the Mind,” about the Liberty “Brain Lab,” a world-class scientific facility on campus where athletes can train their minds to focus and succeed under the pressures of Division I athletics. Austin Reddington was also nominated for his graphics work, and Alex Short was nominated for his audio projects.

“Game On” recently announced that it will be rebranding the show as “Flames Central” starting in September, with more focus on Liberty Athletics’ success.