Famed clinical psychologist Dr. Jordan B. Peterson tackled questions about the struggles of life and spiritual issues in Liberty University Convocation on Friday. He offered students an academic case for how they can overcome, even transcend, their obstacles.

Peterson is a professor of psychology at the University of Toronto and a best-selling author. His recent title, “12 Rules for Life: An Antidote to Chaos,” was the No. 1 nonfiction book in 2018 around the world.

“He’s been nominated for five consecutive years as the best university lecturer in Ontario,” Liberty President Jerry Falwell said as he welcomed Peterson to the Vines Center stage for the first time.

Peterson said he appreciated the “warm welcoming” atmosphere at Convocation.

“It’s so nice to come to a gathering like this that isn’t characterized by a toxic undercurrent of cynicism,” he said. “I see that in so many universities, and it is really corrosive. … It was lovely to see … [that] you seem genuinely pleased to be here.” 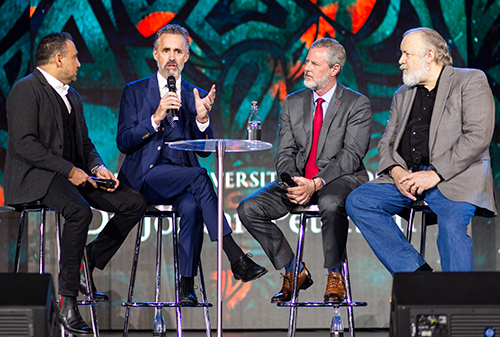 On stage, Peterson was joined by Falwell, Senior Vice President for Spiritual Development David Nasser, and Dr. Gary Habermas, distinguished research professor of Apologetics and Philosophy at Liberty’s Rawlings School of Divinity, who asked Peterson questions about purpose, open dialogue and free speech, and how the Bible applies to psychological struggles. Last year, Peterson drew attention to Habermas’ world-renowned case for the legitimacy of Christ’s resurrection when he shared an article by Habermas.

The conversation touched on free speech and civil discourse, which Peterson strongly advocates for as essential to people finding “something approximating peace.” Mostly, the discussion centered on the reality of pain and suffering in life, both from natural and malevolent forces, and how people have the power within them to manage that pain and find meaning in life.

“The price of existence is so high,” Peterson said. “Without that sustaining meaning — it corrupts you, it embitters you, and once you are embittered, things go downhill rapidly. You get vengeful, and you get angry, and you get destructive, and, then, there is really no limit to that.”

He suggested that rather than seeking meaning in happiness, people should look to responsibility, treating oneself as “worthy of care and discipline,” and then growing to “burden yourself voluntarily” by taking responsibility for others and for your community.

“There’s more to you than there is to what faces you,” he said.

As the conversation continued, he explained that seeking help is a key first step to identify and confront problems. (He encouraged anyone struggling with suicidal thoughts or depression to seek professional help immediately. At Liberty, students can receive support from an LU Shepherd or from Student Counseling Services.)

“There is no dispute among all the different psychotherapeutic schools that the voluntary confrontation of existential problems is curative,” Peterson said. “It indicates to you that there is far more to you than you think. You have substantial, genuine, deep problems. … But if you decide to take that on as your responsibility, then you can put yourself together psychologically.

Peterson is known for his interests in the psychology of religious beliefs and was not shy about discussing the spiritual implications of his theories. He likened the idea of self-empowerment to what is written in Matthew 7:7 — “Ask, and it will be given to you … knock, and the door will be opened to you.”

“I think that it means that if you actually want to know something, and you devote yourself to something, if you are willing to make the proper sacrifices and reorient yourself, then you can move toward what you are aiming at,” Peterson said.

He later said that the Bible is “profound beyond comprehension.” 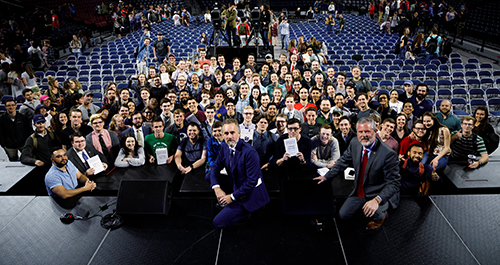 Freshman Hannah Dize, who is studying psychology, said it was an honor to hear Peterson speak.

“He is so well thought-out, and he has a lot of experience in the psych field. … He has really paved big ground,” she said. “You can tell he thinks through everything that he says.”

She said she also appreciated how he and Liberty’s panelists engaged in dialogue about the Gospel and its power to transform lives.

“I think talking is the answer, which is why I am in psychology,” Dize said. “I think that is very healthy. Whether you are Christian or not, it is good to talk about [faith].”