Lawyer, author, and political commentator Alan Dershowitz told students at Liberty University Convocation on Friday that even though he doesn’t share the same religious and political views, he would defend their right to express their beliefs and to even persuade others.

“Make my day, go ahead, try,” Dershowitz said. “If you prevail, OK, as long as I have the freedom to maintain my religion, as long as the government isn’t compelling me to do it. I have no objection to you trying to enter the marketplace of religion and trying to convert people to your way of life. As long as I am free to make my own decision, I have absolutely no problem.”

Dershowitz has had an extensive career in law. As an attorney, he was known for his focus on civil liberties and worked for several high-profile clients, including O.J. Simpson, Woody Allen, and Mike Tyson. He was the youngest professor of law in Harvard University’s history.

Dershowitz is a regular media contributor and has published several fiction and nonfiction books, including a New York Times No. 1 best-seller.

Liberty President Jerry Falwell introduced Dershowitz, noting that his father, university founder  Jerry Falwell Sr., would often have “friendly debates” with Dershowitz even though they held opposing views. President Falwell said he has always admired how Dershowitz has never let his own views influence how he sees the Constitution.

“It’s incredible what he’s accomplished in one lifetime,” Falwell said. “I wanted you to hear from him because there are not a lot of university students who get to hear someone of his stature.”

Dershowitz joined in a discussion with Falwell and Senior Vice President for Spiritual Development David Nasser.

“This is an amazing event and an amazing place,” Dershowitz said of Liberty. “I wish all Americans could see this and hear the songs that join you together. It’s absolutely remarkable — I’m blown away.” 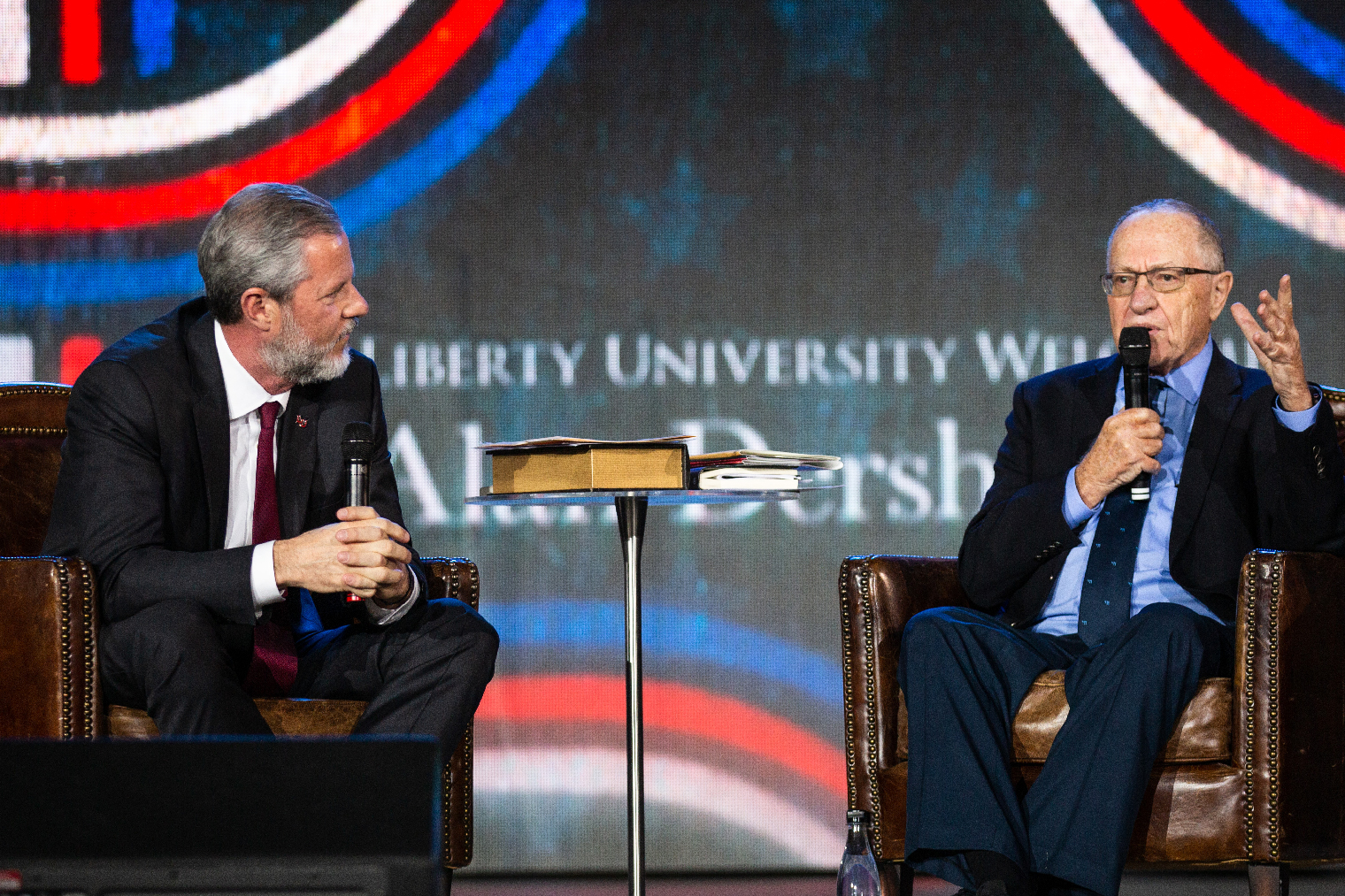 Growing up in Brooklyn after the Holocaust, Dershowitz said his upbringing molded his views and desires to stand up for those who needed a voice. He lost relatives during the Holocaust and knew many survivors of Auschwitz.

“When you were brought up in that environment and background, you couldn’t help but be a civil libertarian, someone who loved liberty and supported due process,” he said.

Dershowitz became active in the civil rights movement and was a vocal voice against McCarthyism.

“I defended the right of people, teachers, and individuals to express views different than my own,” he said.

He applauded President Donald Trump for signing an executive order on Thursday that protects free speech on college campuses and said he believes all voices should be heard. (President Falwell attended the signing; view his remarks on PBS NewsHour.) He also congratulated Falwell for his role in supporting the order.

Dershowitz said that even though he is a liberal, he has been banned from speaking on campuses for being pro-Israel.

“Unless you speak on behalf of identity politics, on groupthink, radical left views, you’re not really encouraged to come on campus,” he said. “But the worst thing is the intolerance that the hard left has toward dissenting views.”

He said Liberty is “more diverse in its opinions than Harvard University” and used the example of his relationship with Jerry Falwell Sr. to show how people can be civil with those they may disagree with.

“We were always civil and friendly. … We listened to each other,” Dershowitz said. “I learned from him. I hope that maybe he learned from me. That’s the nature of dialogue. None of us was born with all the truth about every conceivable issue on our side. We learn from other people. That’s what’s great about (Convocation). … You listen to different points of view. And in the end, there’s only one person who can decide what you think is truth — and that is you.”

Dershowitz said because opinions have become “weaponized” in the news media, it will be hard for students to distinguish what is true.

“That’s why it’s important for you, more than my generation, to think for yourselves,” he said. “Stick to your principles. Remain true to your beliefs. Be open to other points of view, maybe you’ll change, maybe you’ll become a liberal, maybe a you’ll become a radical leftist, who knows. You are free to do that as long as you do it from your own free will, as long as you don’t do it as a result of being pressured by other people.”