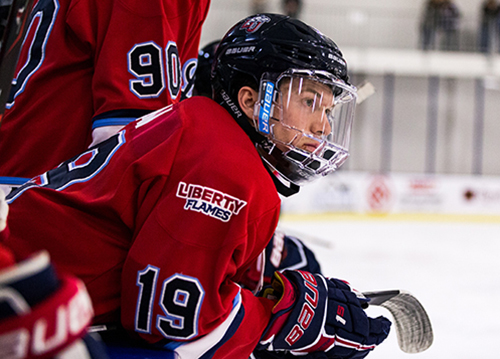 The biennial event is a multi-sport festival similar to the Winter Olympics and will feature more than 3,000 collegiate athletes from around the world. Event coverage be can streamed live on multiple platforms, including Facebook, YouTube, and Twitter.

“It’s exciting for the university and a tribute to the quality of players we’re bringing into the program,” said Kirk Handy, head coach of the DI men’s hockey team.

“That’s great representation for our team,” said Chris Lowes, head coach of the women’s DI team. “It is a big honor. It is going to be a great cultural experience and something they will remember forever.”

Team USA’s men’s hockey team will open against Czech Republic on Friday before playing four more preliminary games — against Hungary on Sunday, Russia on March 5, Slovakia on March 7, and Japan on March 9 — with the top four teams advancing to the March 11 semifinals.

Liberty’s DI men’s hockey team traveled to Russia for a sports outreach in 2009 and to the bordering republic of Latvia in 2013. Ryan is excited to be an ambassador for Liberty in Russia, where Team USA will try to improve on its ninth-place showing in 2017.

“I hope to go over there and do the best that I can to represent my school and my country,” he said. “It will be really good competition. I just want to be an example of Christ in everything I do over there.” 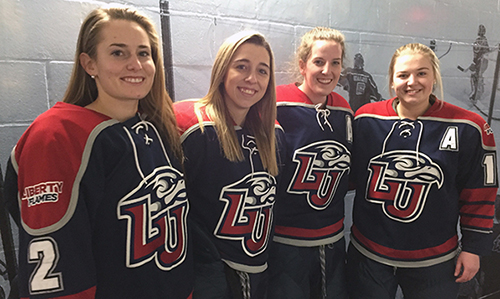 Team USA’s women will play preliminary matchups against Japan on Friday, Switzerland on Sunday, Canada on Monday, Russia on Wednesday, and China on March 8, followed by semifinals on March 10 and championship and consolation finals on March 11.

In four previous appearances, Team USA’s women’s team has never captured a gold or silver medal, but earned a bronze medal in Kazakhstan in 2017.

“Generally, Russia and Team Canada are the heavyweights,” Lowes said. “It’ll be super competitive and a great experience, a chance to represent their country against the rest of the world in their sport.”

Ryan will miss Liberty’s regular-season-ending home series against Alabama this Friday and Saturday nights at the LaHaye Ice Center but will return in time for the March 15-17 ESCHL Tournament at West Chester, Pa., where the Flames will contend for their third consecutive crown.

The four Lady Flames will miss their final two exhibition games set for Saturday and Sunday at the Washington Pride in Rockville, Md., but will return in plenty of time to help top-ranked Liberty defend its ACHA DI National Championship from March 27-31 in Frisco, Texas.