Game-day atmosphere will be electric for Flames’ FBS opener

As Flames Football begins its first season in the Football Bowl Subdivision (FBS) on Saturday at 6 p.m. against Old Dominion University, Liberty University welcomes fans to a whole new level of excitement at a newly renovated Williams Stadium.

The stadium expansion has created a magnificent, more fan-friendly atmosphere to witness one of the most historic events in Liberty Athletics. The transition to FBS — with potential for a bowl bid to the AutoNation Cure Bowl in Orlando — is the fulfillment of a vision by the university’s late founder, Jerry Falwell Sr., to see Liberty compete at the highest level of collegiate athletics. Liberty is now one of only 18 private FBS institutions in the country.

Read more about the changes this season and what you need to know ahead of Saturday’s game: 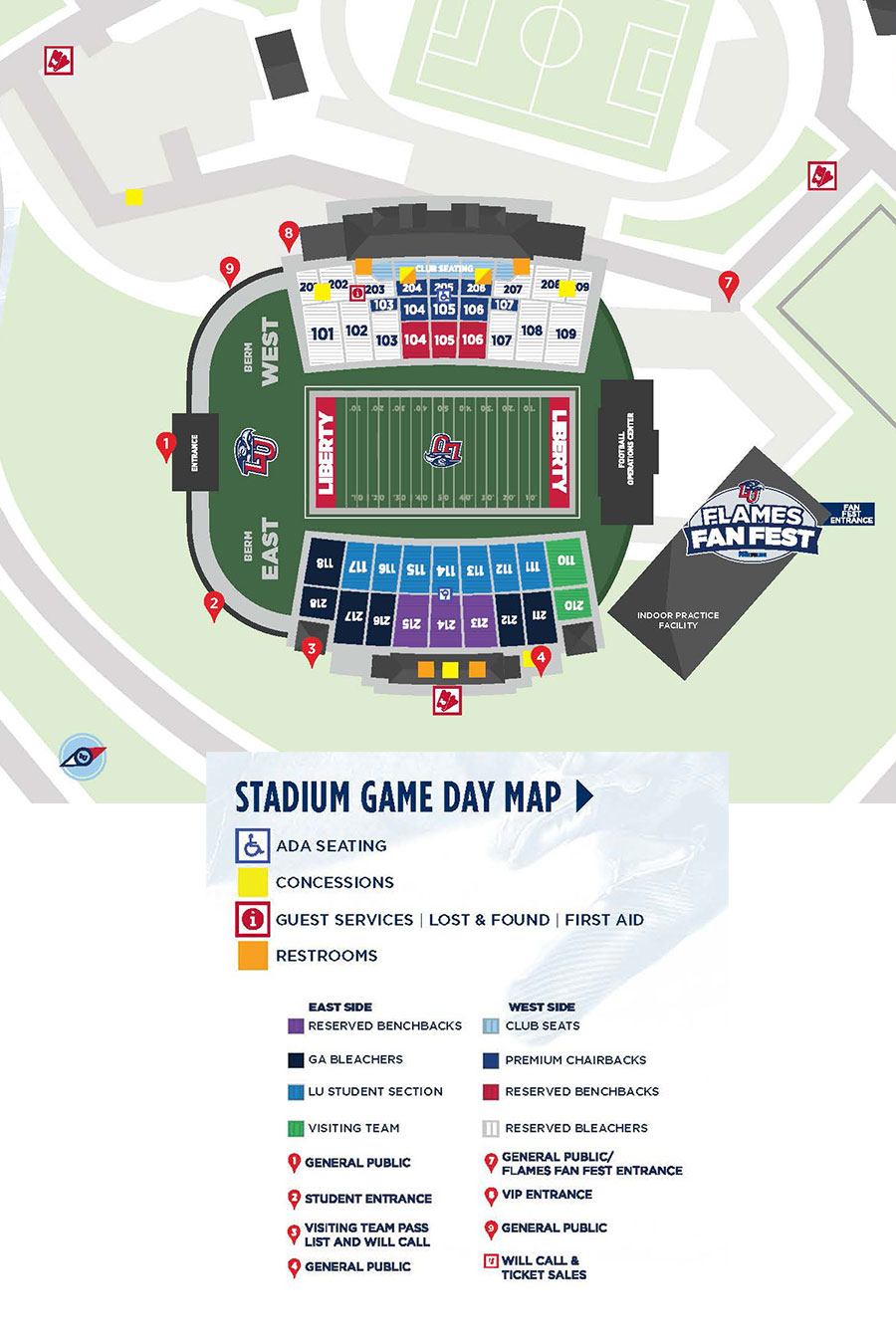 The east side of Williams Stadium has undergone a complete transformation since last season. The addition of an upper deck on the east side has increased total seating capacity of the stadium to 25,000. The west side has been changed to all reserved seating; general admission is now located on the east side, as well as student and visitor seating. (View accompanying map).

Student seating is on Section 111-117; students must show their Flames Pass for free admission and enter through the Gate 2 student entrance, near the south end.

All gates open two hours before game time. Ticketed guests can enter through Gate 1 at the new main entrance on the south side and walk through the new colonnades to the east side seating or enter through Gates 4, 7, and 9 (see map).

A clear bag policy remains in effect, and all guests will be required to pass through a metal detector.

Flames Fan Fest & Kids Zone is a new pregame tradition for all six Liberty home games this season. Held in Liberty’s Indoor Practice Facility, the event is free and open to all ticketholders. Fans are invited to enjoy food and refreshments, have their picture taken with LU’s Cheerleaders and Sparky, listen to music and LFSN’s pregame show, and play a variety of tailgate games. Kids can bounce on inflatables, have their faces painted, try their hand at skills competitions, and sign up for the Flames Kids Club (memberships are $25 for ages 12 and under, offering admission to all Liberty Athletics home contests throughout the 2018-19 season). The alumni tent will also be set up with a pregame dinner available to Flames Club members purchasing meal tickets.

The Fan Fest starts at 4 p.m. — two hours before game time — and winds down 30 minutes before kickoff. (There will be no halftime Flames Kids Club activities as in seasons past). 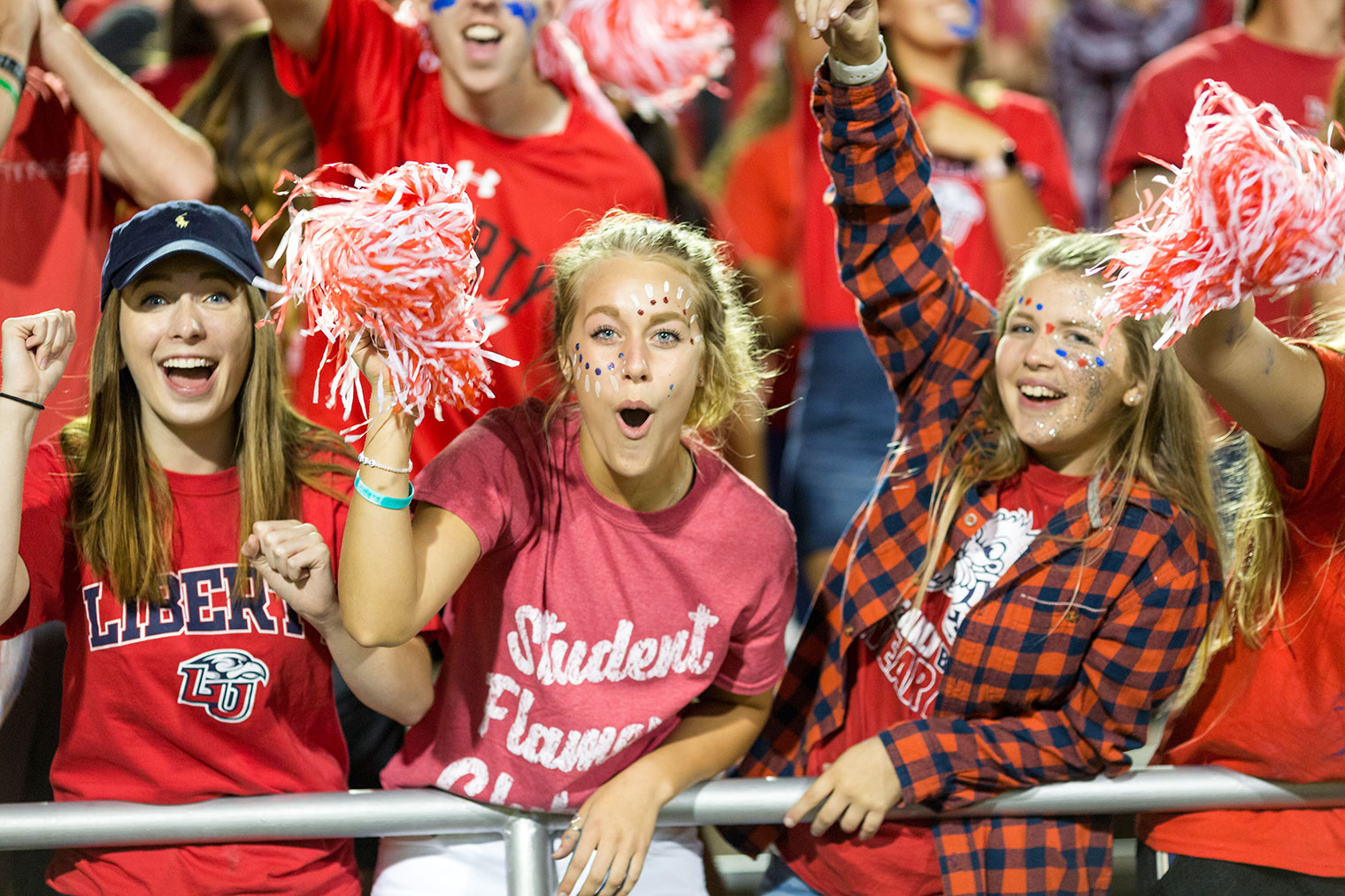 Besides the normal concessions fare, including kettle corn, soft drinks, hot dogs, and hamburgers, new vendors have been added for the east side expansion: Dunkin Donuts, Auntie Anne’s Pretzels, and House of Flames (featuring chicken wings and fries). There is also a new Flames Football team store at the main entrance.

As always, fans will be treated to spectacular fireworks to celebrate each score by the Flames and to a festive show from the Spirit of the Mountain marching band during halftime. 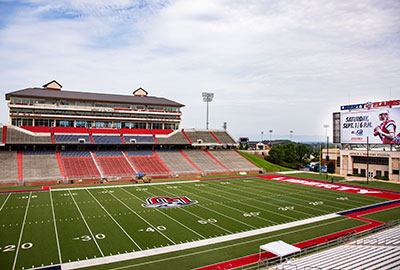 Liberty’s IT Department has worked hard to ensure that Williams Stadium is equipped with the best technological capabilities to serve guests.  A new 3,000-square-foot Daktronics LED videoboard (three times the size of the previous one) will be in use for the first game as well as a new LED ribbon board stretching over 100 yards along the west side mezzanine. Additional speakers will provide better sound clarity. Wireless access has been greatly expanded throughout the whole stadium.

IT is also involved in the ongoing relocation of the Liberty Flames Sports Network (LFSN) radio booths, game operations, and press box facilities above the upper deck on the east side. 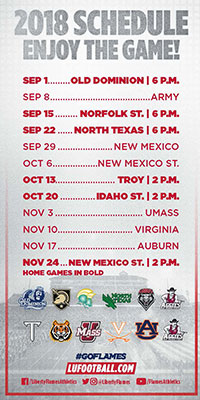 Season-ticket sales for the inaugural year of full FBS competition are up more than 50 percent from last season, and all club seats were sold out for the first time this summer.

Single-game and season-ticket packages are available for purchase at LibertyFlames.com or by calling (434) 582-SEAT (7328) or visiting the ticket office on the second floor of the Williams Stadium Tower from 9 a.m.-5 p.m. Monday through Friday. Tickets on game day will go on sale at 11 a.m. for 6 p.m. games and 9 a.m. for 2 p.m. contests.

Flames Club members receive preferred seating, parking, and pregame hospitality benefits, based upon membership level. Members may park in designated lots available in front of the Luurtsema Center and Hancock Welcome Center, at the main entrances to the LaHaye Ice Center and the Thomas Indoor Soccer Center, and around the Football Operations Center, Liberty Baseball Stadium, and Barnes & Noble Bookstore. To join, call (434) 582-CLUB (2582).

Can’t make it to the game?

Liberty Athletics announced on Monday that it has reached a multiyear agreement with ESPN on the exclusive media rights to its home football games, produced by the Liberty Flames Sports Network. Games will be streamed live on ESPN3 and may be made available on ESPN’s other networks.

Listen to the live audio broadcast from the games on the Liberty Flames Sports Network, or tune in to 88.3 FM The Journey in Lynchburg or a host of other radio affiliates throughout Virginia and North Carolina. The pregame show begins 90 minutes prior to kick-off. 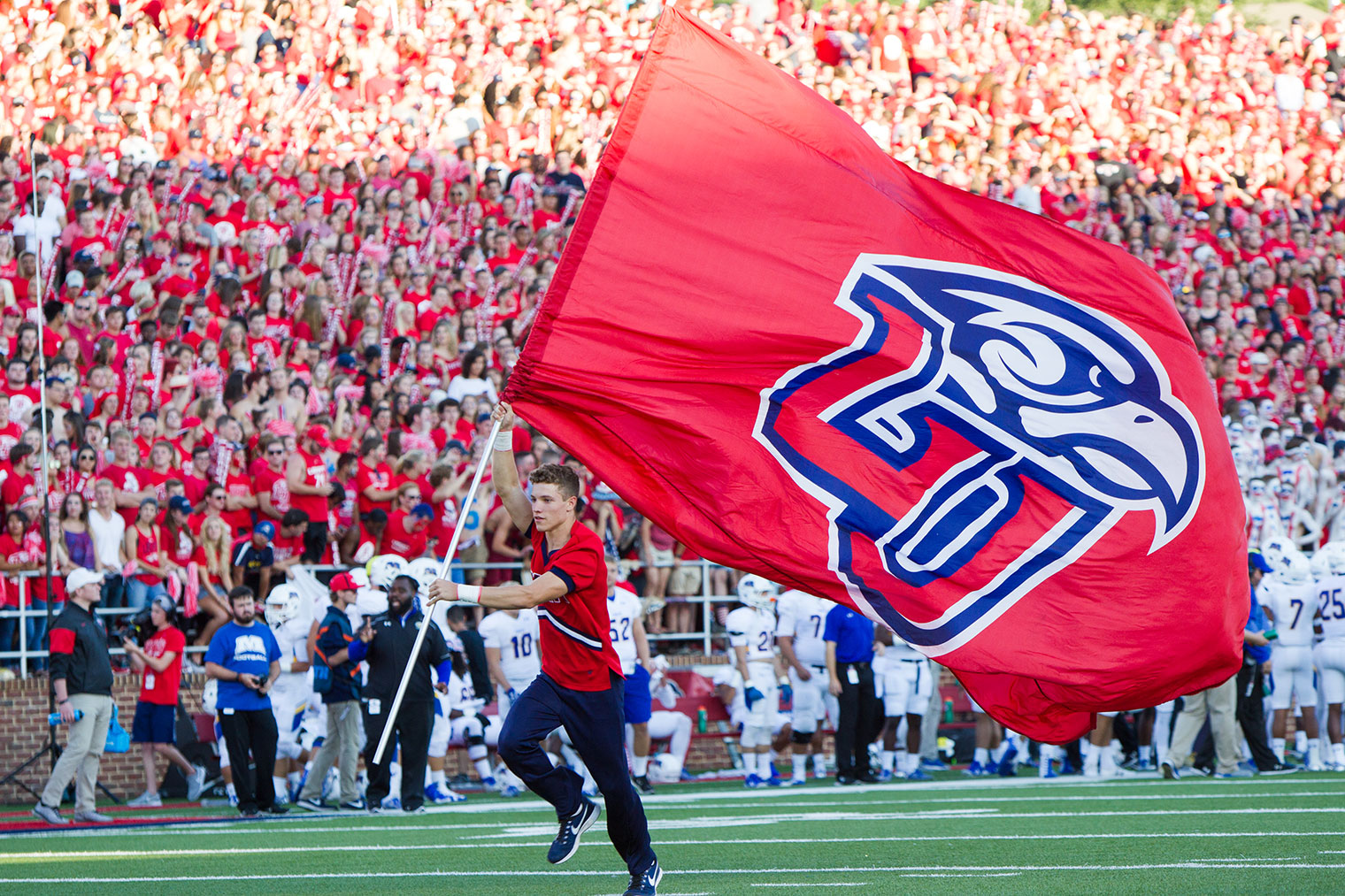