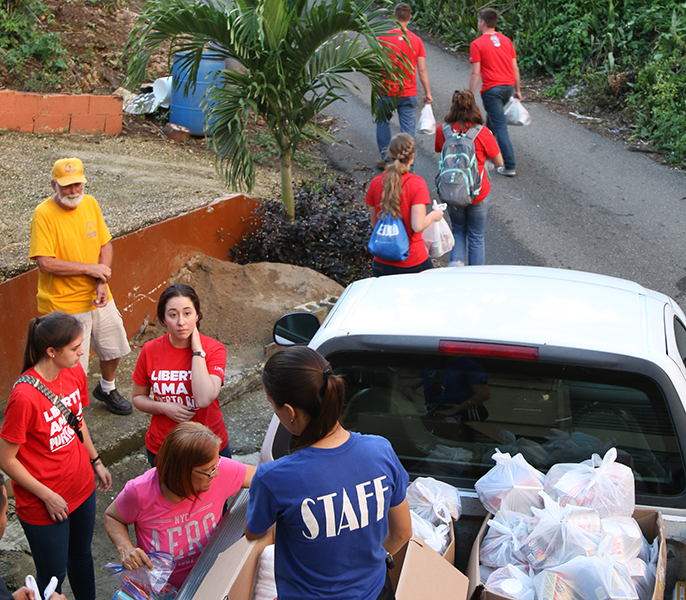 A team of eight Liberty University students and two leaders were dispatched to Puerto Rico on Saturday to continue relief efforts from the widespread damage caused by Hurricane Maria last fall.

The team is part of LU Send Now, the university’s disaster relief initiative that mobilizes students and staff to respond to immediate needs nationally and abroad. Liberty is partnering with the Southern Baptist Convention to assist with cleanup efforts and distribute food and water to residents. They return on Feb. 17.

This is the second team Liberty has dispatched to Puerto Rico during the 2017-18 academic year. The first team spent a week there in November in partnership with Samaritan’s Purse. Liberty teams were also dispatched to other places hit by deadly hurricanes last fall, including Texas and the Caribbean.

Hurricane Maria made landfall in Puerto Rico in mid-September as a Category 4, making it the strongest storm to hit the U.S. territory since 1932. The storm left the island devastated, knocking out power and causing intense flooding. Even five months later, about 400,000 people still remain without power.

Liberty student and team member Kristy Gonzalez said while in Puerto Rico they have had time to interact with residents and hear their stories about how the hurricane affected them.

If you would like to donate to LU Send Now’s disaster relief fund, visit Liberty.edu/LUSend and click on the donation tab.