‘Sheriff of Skid Row’ reflects heart for the downtrodden 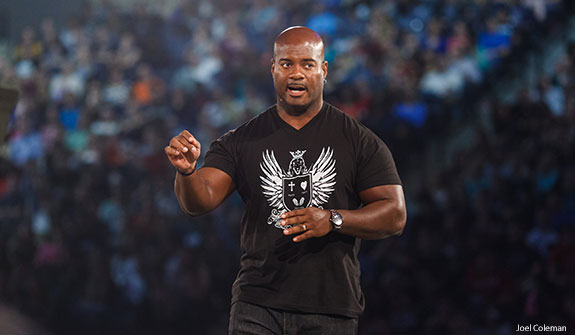 While society tends to write off the marginalized, Deon Joseph, “the Sheriff of Skid Row,” has faithfully served the overlooked and oppressed during his 20-year law enforcement career. As the Los Angeles Police Department officer shared an inside look at his beat — which is filled with memorable characters — during Liberty University’s Convocation on Wednesday, Joseph’s love for the unloved struck an emotional chord with the audience, and assured them that God can use anyone to spark change.

“I want to try to inspire you to be lights in dark places,” Joseph told the crowd. “We can all agree that the world is pretty dark right now. If ever the world needed us to be a light, it is right now.”

This begins, he said, by nixing the excuse, “I’m just a,” when describing oneself.

“Nobody here is ‘just a’ anything. You are all mighty children of the living God,” Joseph said. “Hopefully, I will inspire you to believe in that and go out and change this world for good.”

To illustrate his point, Joseph shared how at the beginning of his career he thought he was “just a cop” and that Skid Row, a Los Angeles community plagued by homelessness and addiction, was hopeless.

But as he served the community, Joseph found comfort in his duties, despite the violence and depravity he encountered. He explained that his mother’s advice, “If ever you feel comfortable in chaos, it’s probably where God called you to be,” assured him that he was where he was supposed to be.

Before moving on, Joseph credited his parents’ example in shaping his character. Their example in loving foster children — 41 over a 47-year span — and feeding the homeless taught him to love “unconditionally and unpatronizingly.”

“The Bible teaches us, ‘Do this for the least of these,’” Joseph said, referring to Matthew 25:40. “When the Bible says ‘least’, I don’t think it is saying the homeless or black people or (any marginalized groups) are any less than anyone else. What it is commanding us to do is treat these people who the world sees as ‘the least’ as you would treat anyone else.”

Joseph shared stories of his interactions with mentally ill individuals, abuse victims, and addicts and his commitment to love them as human beings. Some stories ended in tragedy, but Joseph explained how God used that to motivate change. Other stories ended in transformation. Joseph explained how, after being threatened for months by a man, he reached out and prayed for his oppressor. He didn’t see any fruit from that for a year until the man, reconciled to his family and clean of drug use, came into the station to thank Joseph.

“Don’t think that change is going to come immediately,” Joseph reminded the audience. “We get rolled in this fictional world where we are going to touch people and magically they are going to be all right. It doesn’t work like that, folks. All your job is to do is plant the seed.”

But Joseph, speaking from his earlier point that no one is too insignificant to do God’s work, assured the audience that in following God’s calling they can do mighty works, in spite of their own weaknesses.

“Having these relationships and gaining the trust of the community, them knowing that I am there for them, got me not only favor with God because I was obedient, but also the favor of the men and women I was charged to protect,” Joseph said. “And, as a result, I was able to do these incredible things.”

Joseph shared how God led him to go beyond the purview of law enforcement to help get homeless people off the streets. He also started a mentorship program, a women’s program (which on Day One empowered three abuse victims to come forward and help put a serial rapist away), a hygiene drive, and initiated citywide change in how the mentally ill are treated. Joseph acknowledged that thousands of officers and individuals have stepped in to help with these programs, demonstrating the genuine care many have to see communities lifted up.

In closing, Joseph turned the crowd’s attention to the Bible’s heroes: Moses, Abraham, and David, who each could easily have been labeled “just a” flawed individual before God’s power took control of their lives.

“I want to see 13,000 Davids who are willing to figuratively throw stones at the Goliaths of peoples’ lives and knock them down so that they can be open to love and change,” he said.

Before the featured speaker took the stage at Convocation on Wednesday, Liberty University President Jerry Falwell took a moment to recognize some special guests with deep ties to the school’s history. The Rawlings family — brothers Herb, Harold, Carrol, and George — came to campus for the first time in many years. Their father, the late Dr. John Rawlings, was a mentor of Liberty’s founder, the late Dr. Jerry Falwell. Over the years, the family has strongly supported the university. President Falwell explained that Liberty would not have made it through some of its most trying times were it not for their generous financial donations.

Falwell thanked the brothers on behalf of the university for their support and commended them for their faithfulness in business and ministry over the years (through Impact Youth Worldwide and The Rawlings Group). He also thanked them for a $5 million donation to the university that they presented to him just before Convocation.

“They believe in you, and they believe in this school,” Falwell told the students, noting that generous support is what helps keep Liberty’s tuition among the lowest for private institutions. 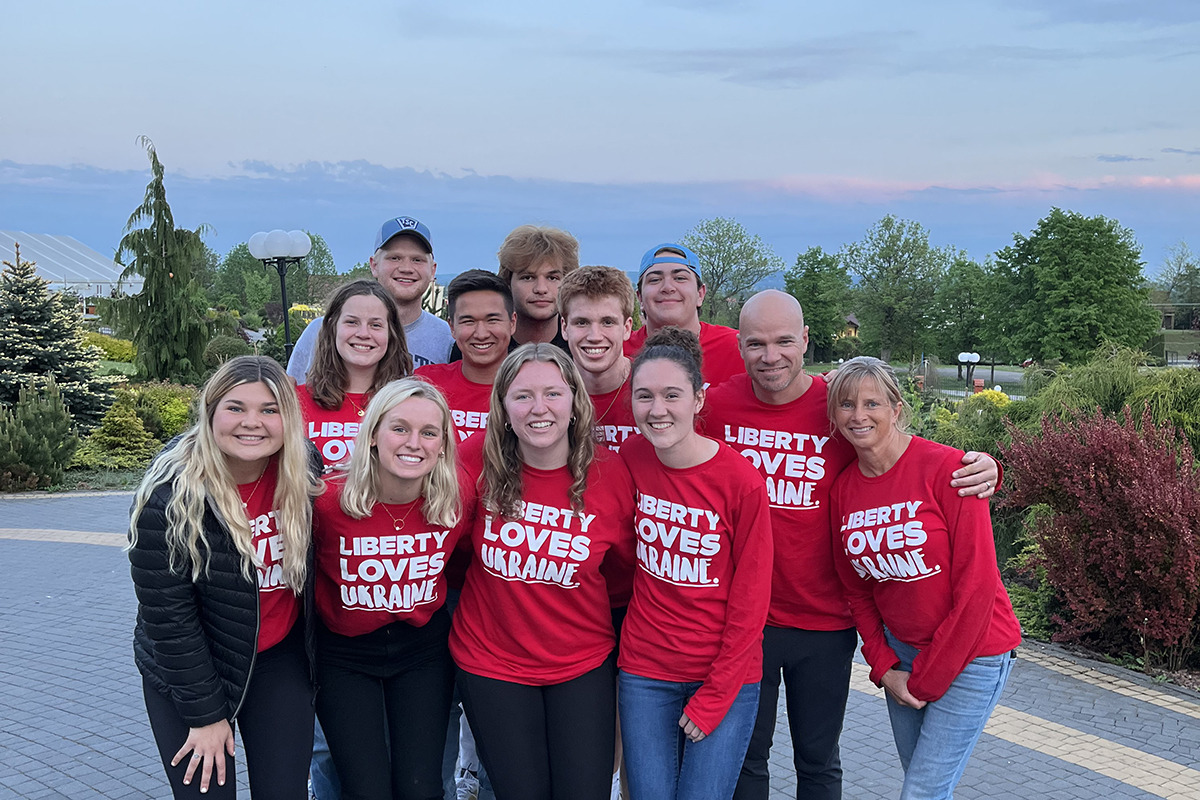