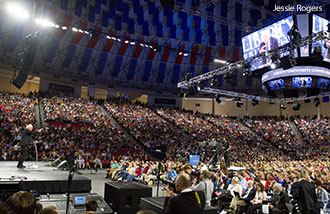 After the eyes of the nation were turned to Liberty University on Monday for a Convocation featuring U.S. senator and democratic presidential candidate Bernie Sanders (I-Vt.), media outlets were quick to note the gracious manner in which the student body received their guest.

“Mr. Sanders, who is Jewish, was greeted politely by the crowd,” wrote Nick Corasaniti in the New York Times. “His speech … did not land with the thunderous applause or the enthusiasm that greeted Senator Ted Cruz of Texas when he announced his candidacy here in March. Often, as Mr. Sanders spoke, he was greeted with polite, if tepid, applause from students. Most students who were questioned afterward said that their minds had not been changed about Mr. Sanders.”

Nationally syndicated columnist Cal Thomas noted Liberty’s history of extending invitations to those on the left in the spirit of polite discourse: “The reception to Mr. Sanders from Liberty students was more gracious than what conservative speakers usually get on liberal campuses, if indeed they are invited,” he wrote. Thomas pointed to the example at Rutgers University last year when former Secretary of State Condoleezza Rice backed out of giving the commencement speech due to student and faculty protests.

An editorial in the Richmond Times-Dispatch said Liberty served as an example of tolerance to its peers in higher education.

“Just as refreshing as Sanders’ embrace of dialogue,” the column reads, “was the response from Liberty. Although the students did not exactly give him a standing ovation, they listened respectfully. … Compare that with the petulant sense of entitlement displayed by students at dozens of other universities who have tried to stop invited speakers from appearing. There were 16 incidents last year alone — several of them successful.

“Liberty has certainly lived up to its name. In the process, it has taught a much-needed lesson about diversity, intellectual curiosity, tolerance, and open-mindedness to others.”

Students will have the opportunity to hear from more presidential candidates this semester, and the university is working on scheduling more for the spring. Republican Scott Walker will speak on Oct. 16, and Republican Ben Carson is scheduled for Nov. 11.