Ivy Lake water level to be lowered during repairs

Liberty University officials have announced that the water level in Ivy Lake will be lowered by 15 to 20 feet next week while repairs are being made to the dam.

The 112-acre lake, located 15 minutes from campus in Forest, Va., was donated to Liberty in 2008 and has been used by students for academic and recreation purposes and by the school’s crew and triathlon teams. Many neighbors and other local residents swim and boat at the lake free of charge.

Liberty notified boat owners last week that the lake lowering would begin on Saturday, Jan. 11. A few of them indicated they would need more time because the lake was frozen, so the process was delayed until next week to give the 10 or 12 boat owners a reasonable amount of time to secure their boats. 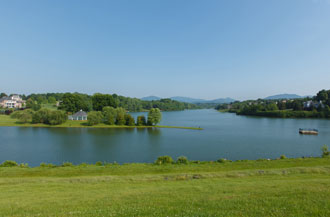 In recent years engineers have discovered design flaws in the dam and it was declared a high hazard dam by Virginia’s Department of Conservation and Recreation. Liberty has been working diligently with the DCR to develop a plan to make repairs that will bring the dam into compliance with the state’s safety laws.

In an email to Liberty officials last week, Tom Roberts, a regional dam engineer with DCR, said lowering the water level 20 feet and maintaining it at that level “makes it a safer condition for the approximately 1,000 identified downstream residents until the spillway has been improved to minimally required dam safety requirements.” Lowering the lake level creates more storage for flood waters.

“This shows again that Liberty University has been very pro-active in maintaining the dam in a manner to promote public safety,” Roberts said.

President Jerry Falwell said the DCR has called Liberty “exemplary dam owners” and that the university is doing “exactly what the DCR expects a responsible dam owner to do in situations like this.”

“The law requires dam owners to be prepared for cataclysmic floods. Liberty remains concerned that the state’s laws place too much financial burden on owners of existing dams but we share the DCR’s concerns about the safety of property owners downstream, no matter how remote the actual danger may be. The DCR is working hard to accommodate our needs for more time to bring the lake into compliance. It is the least that we can do in return to temporarily lower the lake level,” Falwell said.

Liberty officials met with DCR officials in early September 2013 and advised the DCR that less expensive construction methods had been identified and that Liberty had therefore decided to repair the dam without any help from homeowners. The new plan eliminated the proposed contribution of about $1 million from homeowners and provides for the lake to be donated to the homeowners, who would then take responsibility for all future maintenance of the lake with Liberty reserving the right to use the lake for its purposes.

Liberty shared the same information with a group of homeowners later in the fall and explained that, while Liberty preferred not to remove the dam, it was a real option because most of the cost of removal could be recouped by selling the real estate and the stream credits for environmental purposes.

“We are pleased that Liberty’s engineers found a cost effective way to repair Ivy Lake,” President Jerry Falwell said Saturday. “The feedback I am receiving from property owners is that the majority of them are more than willing to take ownership of the lake as proposed by Liberty. I am glad to see that this story appears to have a happy ending in sight.”

A formal proposal to homeowners should be ready in the next two to three weeks, he said.

On Dec. 9, 2013, DCR officials wrote to Liberty to remind the university of its commitment to lower the lake level as agreed in September. Liberty officials checked the valve and divers found that the rod connecting the underwater valve with the crank at the surface had been removed by vandals. A new valve was ordered and installed in the past week.