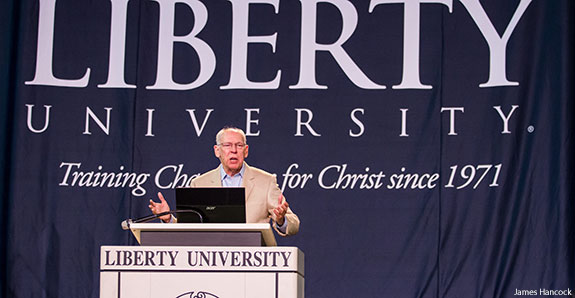 Pastor and political activist Rafael Cruz, father of U.S. Senator Ted Cruz (R-Texas), was introduced at Liberty University Convocation on Wednesday as “a powerful example of freedom” and “the epitome of the American dream.”

Cruz was born and raised in Cuba during the tyrannical reign of Fulgencio Batista. When he was a teenager, Cruz was imprisoned and tortured because of his beliefs on individual freedom. He moved to Texas in 1957 with little more than the clothes on this back.

After paying his way through college and launching a successful career, Cruz became active in politics in the 1980s and helped with former President Ronald Reagan’s campaign.

As Cruz addressed the students, he emphasized the value that Christians have had historically and should have within the government today.

Cruz said he felt the Lord telling him earlier this year that the church is responsible for the current ungodliness in America. He likened it to God telling Ezekiel that His people are to be watchmen on the wall, warning people of danger.

“My question is, are we justifying the wicked actions of government by remaining silent? Someone once said that ‘silence is consent.’ Have we been encouraging other Christians to vote for righteous leaders like we should?” Cruz asked.

Citing Exodus 18:21 and Acts 6:3, Cruz said the Bible tells Christians “exactly who to vote for.” This includes choosing qualified leaders who are truthful, of good reputation, full of wisdom, and who are full of the Holy Spirit.

Cruz said what is happening in our government and in our society today is not our country’s heritage.

“The Declaration of Independence and the Constitution of the United States of America … are the two greatest documents that have ever been written outside of the Bible,” he declared. “The reason is because those two documents were written on the knees of the framers. These were men of God that were receiving revelation from above.”

Cruz noted a recent study that found only 50 percent of eligible evangelical Christians are registered to vote. He said in order to alter the course of our country, Christians must step into the ballot box.

“God has called us to be salt and light, and we have to stop hiding behind the four walls of the church. We have been called to make a difference. The Bible says we are ambassadors of Christ. We are to proclaim the whole counsel of God and shout it from the housetop. We have a responsibility to elect righteous leaders.”