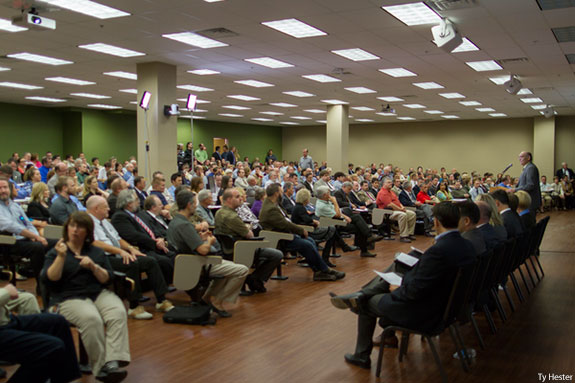 Liberty University’s resident and online professors — more than 2,600 strong — gathered both in person and online from around the world for the university’s all-faculty meeting on Wednesday, Sept. 25. Residential faculty met in Arthur S. DeMoss Learning Center as remote faculty viewed a live stream broadcast of the event. The meeting is held each semester.

Dr. Ron Godwin, provost and senior vice president for Academic Affairs, encouraged faculty to continue their commitment to Training Champions for Christ — what he called the “added ingredient” that makes Liberty so special. As he shared academic news from a variety of programs, he told the faculty that he and the university deans regularly lift up their prayer needs.

Godwin announced some changes in personnel, including the retirement of Larry Shackleton after 11 years as registrar. Luke Gentala will now serve as university registrar with Michael Shenkle as senior associate registrar. Another key asset to this team, Joshua Redmond, was named director of university and external reporting.

Faculty then heard a number of updates and announcements from several members of leadership, including a brief but inspiring speech from two-time Olympic gold medalist Dot Richardson, who recently joined Liberty Athletics as head softball coach.

Dr. Norman Mintle, dean of the School of Communication & Creative Arts, announced some new ventures in broadcasting, including a television station recently purchased in Danville and a new studio that is under construction in the former Sears property at River Ridge Mall.

Dr. David Nemitz, director of the Center for Advancement of Faculty Excellence, announced that the university is revising up to 1,000 online courses in the next year to keep programs relevant and challenging.

President Jerry Falwell, Jr. shared updates on the university’s campus rebuilding phase. He reminded the faculty of Liberty’s rich history and commended them for their part in seeing his father’s vision become a reality.

“Liberty is now training doctors, lawyers, filmmakers, … business people, (and) ministers to not only be successful in their careers but to also live their lives as Jesus taught,” he said. “We know that the impact that those graduates will have on the lives of others and on our culture will be eternal, so don’t ever forget how important what you are doing here is. … What you are doing is changing the model of higher education in this country.”

Falwell said Liberty seeks to redefine what is considered successful in higher academia — that schools will be considered prestigious based on how well they train their students and not for how selective they are in the admissions process.

He noted that all over, including in the media, people are taking notice of Liberty.

“Finally the world is starting to recognize that we really are doing things differently here. We are a Christian university, which is very rare these days, but what really makes us unusual is that we are world-class in academics, athletics, and our facilities.”