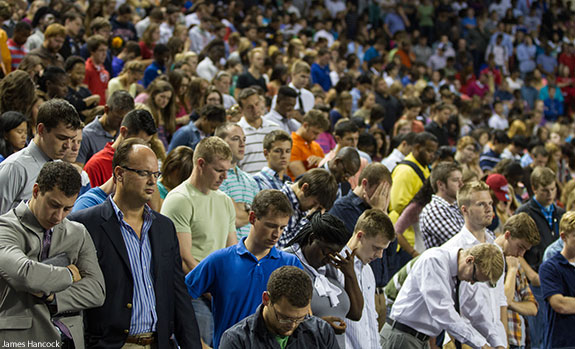 More than 10,000 Liberty University students and faculty prayed for the victims and families affected by the 9/11 attacks 12 years ago during a solemn moment of silence at Convocation on Wednesday. With more than 30,000 military families represented within the Liberty family, the sacrifices honored in the silent Vines Center showed an appreciation for our nation’s freedom.

Vice President of Communications Johnnie Moore reminded students of the importance of the date that has become immortalized for every American.

"Every generation has its day of infamy," Moore said. "For your grandparents it was the day the Japanese flew planes into Pearl Harbor. For your parents, it was the day John F. Kennedy was assassinated. For our generation it was the day when planes flew into the World Trade Center, a field in Pennsylvania, and the Pentagon."

Moore also honored the U.S Ambassador and three American servicemen killed during the terrorist attacks on the American Embassy in Libya last year.

As he reminisced about the tumultuous day in 2001, his freshman year at Liberty, Moore told students how the entire campus met to pray after the attacks for the families affected on campus and around the country.

On Wednesday, all flags on campus were lowered to half-staff in honor of Patriot Day and National Day of Service and Remembrance, recognized annually in the U.S. on Sept. 11.

Dr. Michael Youssef, the Egyptian-born pastor and founder of The Church of Apostles in Atlanta, Ga., delivered the Convocation message, instructing students that, “God can use one man to make a difference.”

He shared the history of how Muslim caliphates moved into Northern Africa and began to spread Islam throughout a region that was once 85 percent Christian. Youssef traced his lineage to the Coptic Christians who were persecuted, if not martyred, because they refused to convert or pay the “jizya” fine (a tax levied on non-Muslim citizens).

“It just shows you that what you believe matters. It matters to you, but it (also) matters to the next generation that you will be training,” Youssef said. “One man, one woman can make a difference. You and God are a mighty army.”

He said Liberty students are blessed with many opportunities — from politics, education, business, and other degree programs — to impact the world.

“You are and will be Champions for Christ,” Youssef concluded. “This is the place and you are the generation that will change the world for Jesus Christ.”