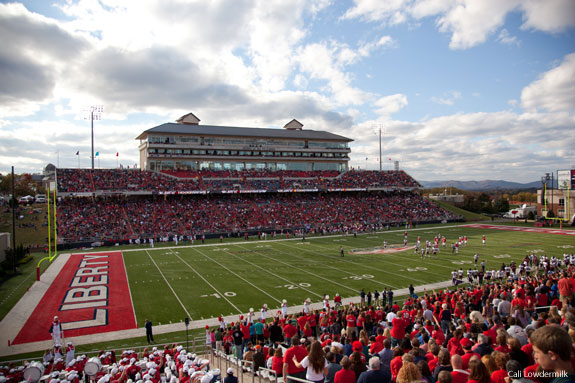 A recent New York Times article featuring Liberty University’s “football crusade” has helped to advance Liberty’s mission as the school looks to achieve success on a national scale, in the likes of powerhouse Notre Dame.

“We have received extremely positive comments from Liberty alumni, fans, and athletics administrators from all over the country,” said Jeff Barber, Liberty’s director of athletics. “It gave them a deeper understanding of our mission and our accomplishments to date. Athletics will shine the light on the university's mission as demonstrated simply by this article.”

In a welcome surprise, one of those comments came from Notre Dame’s president emeritus, the Rev. Theodore M. Hesburgh. In a letter to Chancellor Jerry Falwell, Jr., Hesburgh said he enjoyed the article, encouraged Falwell, Jr. with a story of Notre Dame’s rise to the top from a football roster of only 16, and sent “sincere congratulations and prayers for continuing growth in the years to come.”

Falwell, Jr. said he was moved by Hesburgh's thoughtfulness.

"As president of Notre Dame, he witnessed the vision of Notre Dame's founders become reality. That vision had much in common with my father's dreams for Liberty University and reading Rev. Hesburgh's letter about Notre Dame's rise to athletic prominence made Liberty's goals seem so much more attainable," he said. "I am grateful for his letter and I believe he would welcome a friendly Liberty/Notre Dame football rivalry someday. I know I would!"

It was Falwell’s father, Liberty founder Dr. Jerry Falwell, Sr., who envisioned a world-class university for evangelical Christians in its academic but also athletics offerings, often using the examples of how Notre Dame and Brigham Young had already become the flagship universities for Catholic and Mormon young people. He knew the time would come one day when Liberty would reach the same level.

As the New York Times reporter put it: “At Liberty, once a tiny Bible college but now a budding giant, the plan is for college football — big-time, always-on-television college football — to do for evangelical Christians in the 21st century what Notre Dame football did for Roman Catholics in the 20th.”

The article showed how much of Falwell’s vision has already been fulfilled, as Liberty has become the world’s largest Christian university nearing 100,000 in its residential and online programs. With a firm financial footing, its athletics teams, it said, will extend its reach.

“Liberty sees an opportunity, a place on the vast stage that is college football, which is something akin to a religious experience in America. There is no pulpit as well lighted as the end zone of a national championship game,” it reads, adding a quote from Falwell, Jr.: “It’s where we should be. We would be reneging on Liberty’s mission if we didn’t try.”

One Flames fan read the article and is so optimistic of a Notre Dame-Liberty football matchup that she sent Chancellor Falwell a $1,000 donation for advance tickets for the game.

“I realize there is no set date for the game at this time, but we have faith in your father’s dream and want to make sure we have good seats!” writes Lisa Vogel, whose husband Dr. Robert Vogel is a student at Liberty University School of Law.

Barber said this kind of feedback is “a precursor of what happens when you play FBS football and play teams at this level. It certainly shows that once the move is made to FBS football, there will be more people than ever who want to watch Liberty football,” he said.

The rivalry between the Flames and Fighting Irish has already been struck, including previous head-to-head matchups in baseball, men’s basketball, softball, women’s volleyball and women’s basketball. Liberty picked up its first-ever win over Notre Dame when the Flames’ baseball program opened the 2008 season with a 6-2 victory over the Fighting Irish. Liberty has also squared off against Notre Dame at the highest level of competition in NCAA Championship events in 1997 in volleyball and during the Fighting Irishs’ run to a women’s basketball national runner-up finish in 2012.

Liberty became the first in the Big South this year to earn the conference’s Sasser Cup for the fifth year in a row, awarded to the institution with the most successful athletics year.