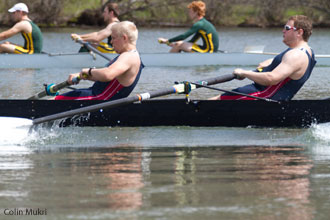 This will be Liberty’s first appearance at the ACRA Nationals in its third full season as a team.

Junior Austin Jones will lead the men’s varsity four. He will be teaming with Connor Houston and Mitchell Dieudonne, who he rowed with at the Dad Vail Regatta in Philadelphia two weeks ago, and Robert Fonnor.

Two recent graduates competing in their final race will lead the women’s varsity four: Amy McGowan and coxswain Toni Ortu. Sophomore Abigail Lenz and junior Lindsey Churchill will join them in the race.

McGowan and Ortu, along with men’s varsity four coxswain Sarah Morris, were all founding members of the crew team in 2009.