UPDATE: The voting precinct at Liberty University received 590 votes, more than any other precinct in the state. Read a related story at wsls.com. 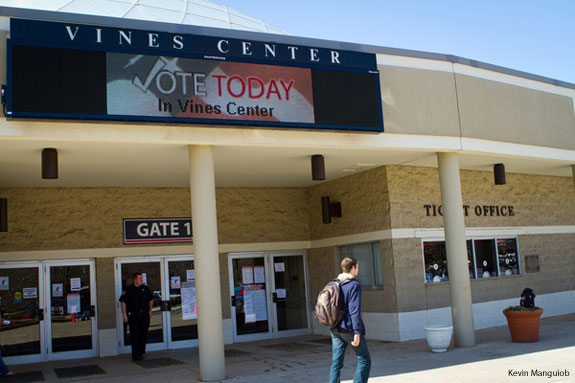 Liberty University students who are registered to vote in Virginia had the opportunity to cast their votes on campus for the first time Tuesday in the 2012 Republican presidential primary. 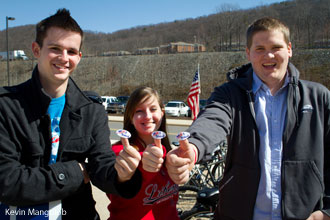 “We were very pleased to learn that as of 4 p.m., nearly 400 students have voted at the new precinct in the Vines Center,” said Chancellor Jerry Falwell, Jr. “I believe that’s a strong turnout, given the fact that it’s just a primary and only two of the candidates are on the ballot in Virginia. That’s a very good sign that the polling place was needed and that it will be used in large numbers by our students in the future. We are grateful for what the local authorities have done to make it a reality in time for this primary.”

Liberty students previously voted in the Ward 3 precinct at Heritage Elementary School and rode buses to the polling place.

Students say the new precinct is a welcome change.

“It’s extremely convenient to vote in the Vines, because it’s so close,” said sophomore Karren Jeffers of Stafford, Va. “Last semester I went to Heritage Elementary and it took a lot of time, especially for people who don’t have cars.”

In October 2011, Lynchburg City Council decided to redraw voting lines, creating a new precinct at Liberty to be used by the 4,122 students living on campus and registered to vote in the city at that time.

Liberty University made national headlines in 2008 when the school recruited about 4,000 students to register in the state of Virginia.