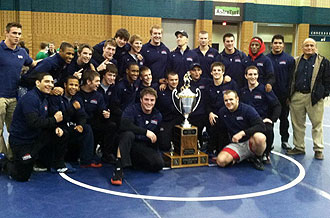 The Flames took down Lindenwood-St. Charles in the final to win the two-day tournament.

Head coach Jesse Castro said the weekend “was one of great accomplishment and pride in the team and the way they perform. … I think it was kind of a relief, being as it was one of our major objectives of the year.”

The team, with more than 40 members, formed its training schedule so that it will peak in the post-season, Castro said.

This is the first national title the Flames have won after being reclassified from a NCAA Division I program to a club sport at the end of last season. The change was due to Title IX, the law that requires equal opportunities for men and women to participate in educational programs that are federally funded.

About 30 percent of the team returned to wrestle in the club program, Castro said.

During the weekend, the Flames joined other schools for the NCWA’s 6:12 project, which gives teams a chance to participate in service projects in the cities where they compete. The teams volunteered at City of Refuge, an organization that offers basic necessities, job training and education to homeless people in the Atlanta region.

The Flames are looking ahead to the Mid-Atlantic Conference home meet on Feb. 25, when they will host about 20 teams. A good showing at home will mean the Flames will compete in NCWA nationals scheduled for March 8-10 in Daytona Beach, Fla.

Wrestling has been offered at Liberty since 1973 and is one of the 29 Club Sports programs.

For complete results, go to www.ncwa.net/results