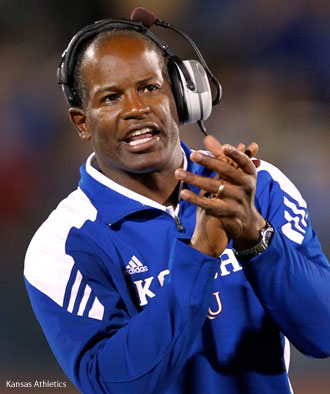 Liberty University Chancellor and President Jerry Falwell, Jr., and Director of Athletics Jeff Barber have announced that former Nebraska standout quarterback and Buffalo and Kansas head coach Turner Gill has been named the eighth head coach in the history of the Flames football program.

The Liberty University community will welcome Gill Thursday afternoon at an introductory press conference in the Club Pavilion (third floor) of the Williams Stadium Tower.

The event is scheduled to begin at 1 p.m. Thursday and is open to all members of the media, Flames Club members and the general public. The event will also be video streamed live on www.LibertyFlames.com.

In addition to the introduction of Gill, Chancellor Falwell will be making a special announcement concerning the Liberty football program.

Gill’s two-year coaching stint at Kansas was spotlighted by a victory over No. 15 Georgia Tech, 28-25, his first Jayhawks win in 2010, and a 52-45 victory over Colorado, where he rallied Kansas for a fourth-quarter comeback after being down 45-17.

Gill received his first head coaching position in 2006, when he took over a struggling Buffalo Bulls program. After posting a 2-10 record during his inaugural season, Gill guided the Bulls to a 5-7 record in 2007, the program’s best mark in more than a decade, when they had finished 8-3 in 1996 while competing at the FCS level (then called I-AA football).

Gill was honored for his turnaround efforts in 2007 when he was named Mid-American Conference Coach of the Year, following the Bulls’ 5-3 record in conference play. Buffalo finished the season 4-2 in the MAC East Division, earning the Bulls a share of the conference regular-season title in just his second season at the helm of the program.

Gill continued the upward trend in 2008, leading Buffalo to an 8-6 overall record and the MAC championship following a 42-24 victory over Ball State in the conference title game. The victory earned the Bulls the program’s first-ever postseason bowl game appearance, where Buffalo lost to Connecticut in the International Bowl.

The 2008 season saw Gill earn MAC Coach of the Year honors by The Sporting News and he was a finalist for the Bear Bryant National Coach of the Year award. With Gill at the helm of the Bulls’ high-powered offense, Buffalo set a program record by scoring 424 points in 2008, which ranked No. 34 nationally in scoring offense.

During his decade-plus coaching stint in Lincoln, Neb., Gill was part of a coaching staff that guided Nebraska to 13-straight bowl appearances and three national championships (1994, 1995 and 1997).

Gill instructed two All-America quarterbacks at Nebraska in Tommy Frazier (1995) and Eric Couch (2001). Couch became the third player in the storied history of the Cornhusker program to win the Heisman Trophy, also doing so in 2001.

Gill was honored himself in 2002 when he was a finalist for the Frank Broyles Award, given annually to the nation’s top assistant coach.

Prior to his full-time coaching days at Nebraska, Gill also served as a graduate assistant at North Texas (1989), Nebraska (1990) and Southern Methodist (1991). Gill also served one year as the Green Bay Packers’ Director of Player Development in 2005, before leaving the professional ranks to return to the collegiate level to take over the Buffalo program in 2006.

During his playing career at Nebraska (1980-83), Gill guided the Cornhuskers to a 28-2 record and an unblemished 20-0 record in conference play. He led Nebraska to three-straight Orange Bowl appearances, spotlighted by a win over LSU on Jan. 1, 1983.

Gill was a three-time Big Eight all-conference selection, earned second-team All-America honors and was a Heisman Award finalist, where he finished fourth in the voting in 1983.

Gill was honored as the quarterback selection to the Big Eight Conference All-Decade Team (1980-89) and has been inducted’ into both the Nebraska Football and Orange Bowl Halls of Fame.

Gill also played collegiate baseball for one season at Nebraska and earned All-Big Eight honors at shortstop. Following his collegiate career, Gill played two seasons in the Canadian Football League with Montreal (1984-85) and three years as a baseball player in the Cleveland Indians and Detroit Tigers minor league systems (1986-88).

Gill completed his bachelor’s degree in behavior analysis at North Texas in 1990. The Fort Worth, Texas, native and his wife, Gayle, have two daughters – Jordan and Margaux.

Quote from Liberty University Director of Athletics Jeff Barber:
“Liberty is tremendously blessed to welcome Turner Gill as our new head football coach. As we conducted this search during the past nine days, his name was recommended to us over and over from coaches and athletics directors from around the country as the right man to lead our football program. Turner embraces all that Liberty is and stands for and it will be a privilege to work alongside him as we continue to move our football program forward.”