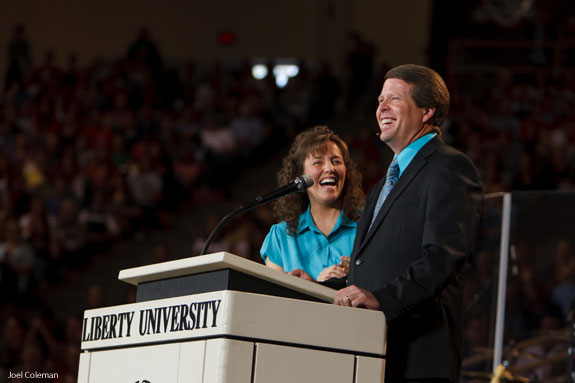 Jim Bob and Michelle Duggar, stars of the reality television show “19 Kids and Counting” on TLC, visited Liberty University along with their five oldest daughters on Wednesday, sharing their testimony about their life, family and faith during convocation.

The Duggars, who have 19 children, have filmed more than 120 episodes. Their eldest son, Joshua, is married with two children. Their youngest child, Josie, was born in 2009.

“We prayed about sharing our story with the television world. We want people to know that children are a blessing from God,” Michelle said. “We told the producers that when they filmed the show they couldn’t edit our faith out of it because our faith is the core of our lives.”

Convocation opened with their daughters Jana, Jill, Jessa, Jinger and Joy-Anna playing their violins. They all began learning how to play an instrument at a young age.

Jim Bob and Michelle shared their story of meeting when they were teenagers and how they prayed for each other at a young age. They encouraged students to pursue the Lord and their relationships will grow closer.

The Duggars also spoke about their pro-life beliefs and their hope that telling their story, through a speaking event or on television, will encourage mothers who think abortion is the only solution. Michelle shared an email they received about a woman who was scheduled to get an abortion the next day and after watching their show decided that if Michelle could raise 17 children (the amount they had at the time) she could take care of one.

The family is passionate about remaining pure in their faith to ensure that they can stay close to the Lord and each other.

“Hopefully as we share our testimony we can point people to Jesus and a relationship with Him,” Michelle said.

After convocation the Duggars met with hundreds of students and signed copies of their books, “The Duggars: 20 and Counting!” published in 2008, and “A Love That Multiplies: An Up-Close View of How They Make it Work,” published in 2011.

“They are such respectable and nice people,” said sophomore Michelle McCabe. “Watching them on TV and in convocation makes me want to hang out with them for the day.”

The Duggars have appeared on national and international television programs and stations including The Early Show, The Today Show, Fox News Network and CNN.