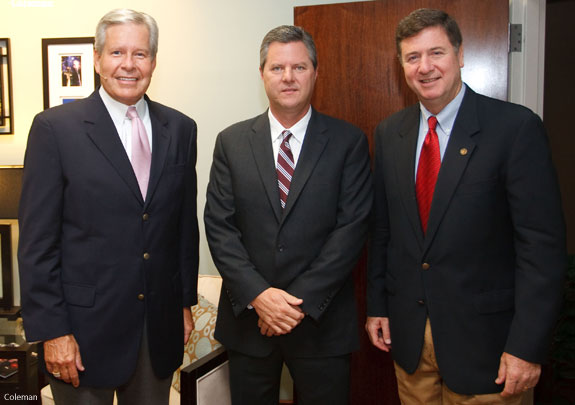 After being introduced by Chancellor Jerry Falwell, Jr., Allen commended Liberty for its growth in recent years which, he said, has been beneficial to both Liberty students and the Lynchburg community. He was particularly enthusiastic about the new Williams Stadium, as Allen played football in school and his father was a coach in the National Football League.

Allen held office as the governor of Virginia from 1994 to 1998. He was elected to the U.S. Senate in 2000. His past contributions to the state of Virginia include the establishment of Standards of Learning requirements and testing, increased funding for education and reduction of taxes.

He emphasized the importance of not just earning a degree at college, but of gaining knowledge with character and living up to personal responsibilities.

Allen called for an “American comeback” based on fundamental foundational principles protected by the Constitution and Bill of Rights.

McEwen followed by explaining why a free market is the best economic system for our country. He also shared his own definition of what freedom should mean – order, liberty and a free market.

McEwen briefly reminded students how a free market works. He said that in a free market, when there is an exchange between a buyer and a seller, both individuals are better off. The only way to make money is by creating products, ideas and services with the intention of blessing other people. According to McEwen, the greater the blessing or contribution, the greater the reward.

McEwen explained that even though Americans make up only four percent of the world’s population they consistently contribute more to the arts and sciences than citizens of all other countries combined. “Half of all the Nobel Prizes in the world have gone to Americans,” he said. “Half of those Americans were not born in America,” as their countries chased them out to come to freedom. America is also the country most nations come to for help when they have natural disasters or need protection from enemies.

He urged students to take a stand against any government decision that would take funds or jobs away from one group of people and give them to another. He believes that by taking away from American citizens, the government discourages Americans from producing, creating and inventing.

McEwen expressed concern that 85 percent of millennial generation voters believe that the answers to America’s problems is more government. “It’s important for us to make it clear: the answer to our problem is not more government, the answer is more freedom.”

“Only in a free market can you create wealth. Every time we take from one group to give to another, we’re in the process of destroying our personal liberties, and they will disappear as surely as if they were taken from us by conquest,” McEwen said. “The greater the government, the greater the poverty. The greater the freedom, the greater the wealth.”

McEwen served as the representative for Ohio in the United States House of Representatives for six terms. While in office, McEwen and United States Sen. Robert Dole participated as United States observers in Warsaw, Poland, to the first-ever parliamentary election of a non-Communist leader of a Soviet bloc country, which led to the destruction of the Berlin Wall.

McEwen is a leading advocate for pro-family interests and free-market economics, which has given him the opportunity to speak to many audiences around the world.

McEwen has spoken at convocation each year for the past three years.