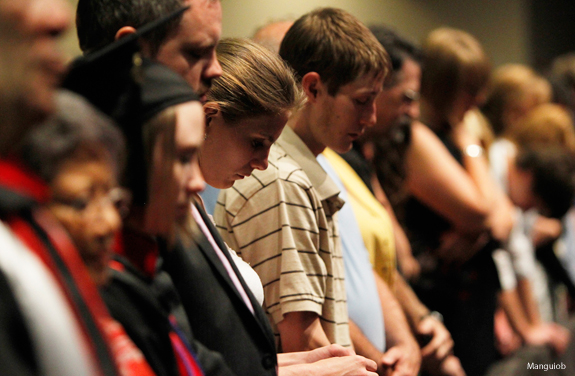 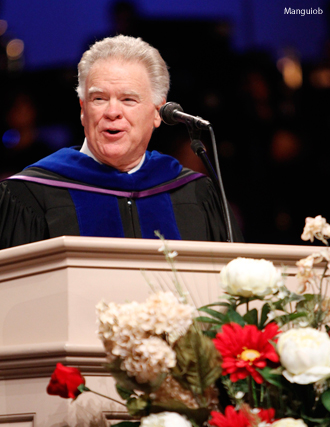 “Our speaker is a man who was greatly admired by my father,” Chancellor Jerry Falwell, Jr. said. “He is a modern-day patriarch of Christian education whose philosophy of education integrates a passion for evangelism and the Great Commission with a rigorous commitment to research and scholarship.”

Patterson has been educating pastors and missionaries for more than three decades, having previously served as president of The Criswell College in Dallas and of Southeastern Baptist Theological Seminary in North Carolina. He challenged the graduates to take 2 Corinthians 5 to heart when making decisions in their lives.

“Whether you are going to be a teacher, or an attorney, or a physician, or a businessman, that is actually your avocation,” Patterson told the graduating class. “You have a vocation already that is given to you of God … to be an ambassador for Christ.”

Chancellor Falwell said the graduates are excellent examples of what champions for Christ should look like.

“I am pleased to report that I have daily witnessed Liberty University fulfilling its mission through each of you,” he said.

Falwell also spoke about his father as the founder of the Moral Majority in 1979, a conservative political coalition made up of people from many faiths who shared certain social values. Around this same time, Liberty began a tradition of having leaders from the realms of politics, business, entertainment, Christian ministry and other professional fields speak in convocation and Commencement, he said.

“Some of them have shared our doctrinal beliefs and some have not, but they have all been champions in their professions for values that are important to conservative Christians,” Falwell, Jr. said. “But the baccalaureate service is different. The ultimate purpose of Liberty University is for its graduates to know Christ and to make him known, and the baccalaureate service is one of the many tools we use in fulfilling that purpose.”

Brewer is the founder and president of World Help, an organization that is dedicated to child advocacy, humanitarian aid, Bible distribution and church planting. World Help feeds 300,000 children worldwide every day and has distributed more than $160 million in humanitarian aid since its founding in 1991.

Mooneyham planted his first church while still a student at Liberty, and went on to become an activist in the Moral Majority, assisting with a national-level voter-registration drive. Since 1986 he has served as the senior pastor at The Tabernacle church in Danville, Va., and his sermons are heard on more than 30 radio stations across several states.

Musical accompaniments for the service were provided by the Liberty University wind ensemble, the Chamber Singers and Sounds of Liberty.