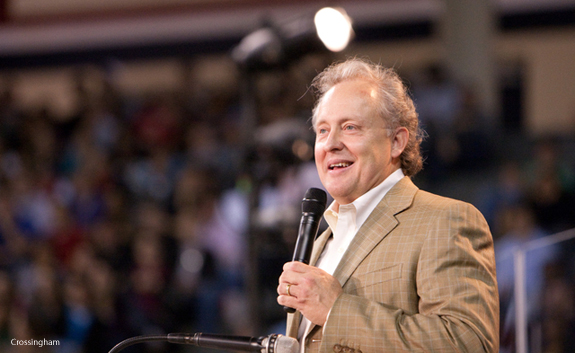 Davis was introduced by LU co-founder and dean of the School of Religion Dr. Elmer Towns, a longtime friend of Davis. The two met more than 20 years ago when they served on the foreign missions committee for Billy Graham.

On Friday, Davis explained how the global church today is larger than it has ever been. With 1 billion Christians in the world, he said, he helped create the Billion Soul Network to “win the second billion.”

The Network is a global thrust to plant 5 million new churches and lead 1 billion people to Christ. It consists of more than 200,000 churches and has become the largest pastors network in the world.

Recognized by many Christian leaders as one of the top networkers in the Christian world, Davis presented parts of his latest book, released for the first time at Friday’s convocation, titled “Gutenberg to Google: The Twenty Indispensable Laws Of Communication.”

Whether you have lived mainly in an age of the printing press, without the use of digital technology, or whether the Internet has been a main form of communication in your life, Davis says the book explains the main ways people can communicate the Gospel.

“I believe God is raising up Gutenbergers and Googlers all over the world who are going to take the glorious Gospel of Jesus Christ to the far corners of the earth,” he said. “… No matter where you find yourself in this spectrum, I believe God has called every one of us, regardless of your profession, to cross the chasm and impact people with the Gospel of Jesus Christ.”

The book is published in honor of Towns, “who has equipped and empowered more ministers for the fulfillment of the Great Commission than anyone else in the global church,” it reads.

Davis has spoken at Liberty before. He said the experience is always exciting.

"I have often said many times, publicly and privately, that no other school, no other university, has impacted the cause of Jesus Christ more significantly than Liberty University in Lynchburg, Va. God has given you tremendous visionary leadership."

Before launching the Billion Soul Network, Dr. Davis served 12 years as the National Evangelists Representative for the National Assemblies of God world headquarters, where he provided leadership for some 1,500 evangelists and equipped thousands of students for full-time evangelism.