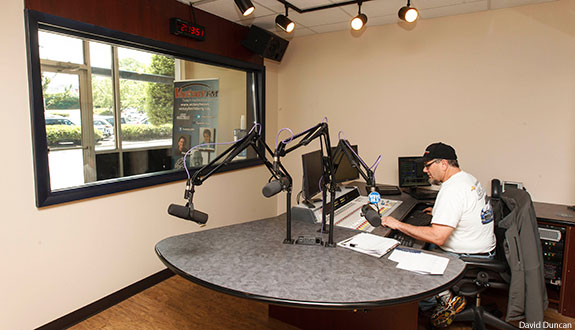 Mark Lamb broadcasts his "Afternoon Get Together" show on Victory FM from the station's new studio in Candlers Station Shopping Center.

After operating out of the same facility for more than 30 years, Victory FM, a broadcast service of Liberty University, settled into its new home in the nearby Candlers Station Shopping Center on Saturday. The university owns the shopping center.

The radio station provides Christian music and Bible teaching programs on a network of more than 30 full-power stations and translators throughout Virginia and North Carolina. It has been housed in a renovated outbuilding behind the Carter-Glass Mansion on Liberty’s campus since it launched in 1981.

The station was off the air for about nine hours for the move, from 10 p.m. Friday through 7 a.m. Saturday.

Wygal spent about a month working on the new location, installing wiring and helping develop the layout. When it came time to move, it was a matter of transferring, setting up, and plugging in the equipment. The greatest challenge on moving day was the weather, with rain making it more difficult to move and align the satellite dishes.

Because the former facility was a renovated house and was never intended to be a radio station, there were difficulties in updating the technology. Edwards and Wygal both say they knew at some point a move would be necessary. When the university offered the new site they were delighted, and were able to take part in the design.

“The layout of the new building just makes more sense as a radio station; the workflow and everything is laid out the way it should be,” Wygal said.

The site has an engineering room that implements new technology so staff can monitor and troubleshoot all critical machines in one location, a function they didn’t have at the old location.

Edwards, who has been with the station since it opened, said the new facility is a great improvement, even though the old location had a rich history.

“That building was just replete with memories, everything we have done … every recording, every student that was hired and trained, the laughter, the tears, all are in that old building,” he said. “We have moved into the new facilities and we will make new memories.”