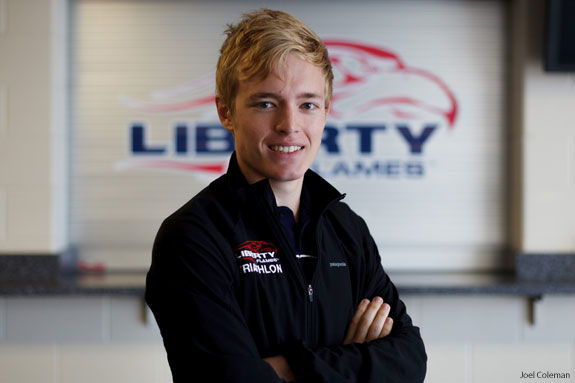 More than 2,500 of the world's best amateur athletes representing more than 40 countries will compete in their respective age groups.

Anderson, who will be in the Male 20-24 Olympic race, is coming off an extremely successful fall, winning all three collegiate triathlons he entered, capped with a win at the Mid-Atlantic Collegiate Triathlon Conference regional championships in Columbia, Md., Oct. 7.

“It was a really good season,” Anderson said. “Being able to win all three races and help Liberty was a definite honor, but I have always dreamed of competing for Team USA so this is the highlight of my life.”

Frackleton will be competing in the Female 50-54 Sprint triathlon.

“I am extremely excited to be competing for my school as well as my country.” she said. “I will be competing against the best athletes in my age group so I am looking to give it my best and have a strong finish.”

Spencer, an exercise science graduate, qualified for the championship along with Anderson and Frackleton in the summer of 2011, when he was a member of Liberty’s team. Her won the 2011 national championship in the 20-24 age group and finished 14th at the 2012 national championships. Spencer will be competing in the Male 20-24 Sprint triathlon.

Anderson, a business marketing major, said he looks to use this opportunity to make an impact on the world stage.

“I am hoping for a top 10 finish,” he said. “These are some of the best in the world, so it will definitely be a challenge to get a good finish.”

He joins a select group of Liberty athletes to compete in a world championship event. Runners Josh McDougal, Jordan McDougal, and Josh Edmonds competed in the Junior World Cross Country Championships in 2005, 2006, and 2007, respectively; and Marie Williams (’09) became the first Liberty athlete to win a world title at the double heptathlon world championship at Liberty’s Matthes-Hopkins Track Complex in 2010.