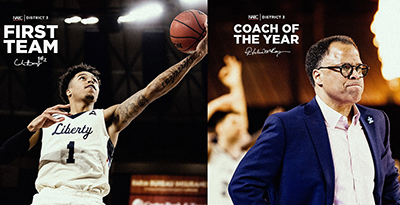 Liberty University’s men’s basketball program was recognized by the National Association of Basketball Coaches (NABC) as Head Coach Ritchie McKay was named the District 3 Coach of the Year and senior guard Caleb Homesley was selected to the district’s First Team.

McKay, who was named ASUN Co-Coach of the Year after previously being named Big South Coach of the Year in 2016, is the first Liberty men’s basketball coach to be selected as a District Coach of the Year in the program’s NCAA Division I era. The Flames (30-4) set a school record for most wins and won back-to-back conference championships for the first time in school history. Liberty ended the season with a perfect 17-0 home record for the first time in school history, punctuated by winning an ASUN Championship final rematch over Lipscomb at the Vines Center.

Homesley, the ASUN Player of the Year who joined Jesse Sanders (2011 Big South Player of the Year) as the second Flames player to receive the conference honor, is Liberty’s first player to be named to an NABC All-District First Team since Anthony Smith in 2009.

Homesley averaged a career-best 15.3 points per game to go along with 5.7 rebounds and 2.4 assists per game, concluding his career at No. 10 on Liberty’s all-time scoring list with 1,539 points and eighth on the all-time rebounding list with 703 career rebounds.

See the complete teams on the NABC website and read the full story on Liberty’s Athletics website.