Although the two men are veterans who share a passion for serving their country, they have opposing perspectives on faith and came together to learn more about one another, promoting the idea that two groups with sometimes heated relations ought to engage in peaceful and open conversations.

“We fight the temptation to primarily label someone with something that God doesn’t primarily label them as,” Nasser said. “Rather than seeing you as a Muslim, I want to see you as a friend and (someone) beloved by God.” 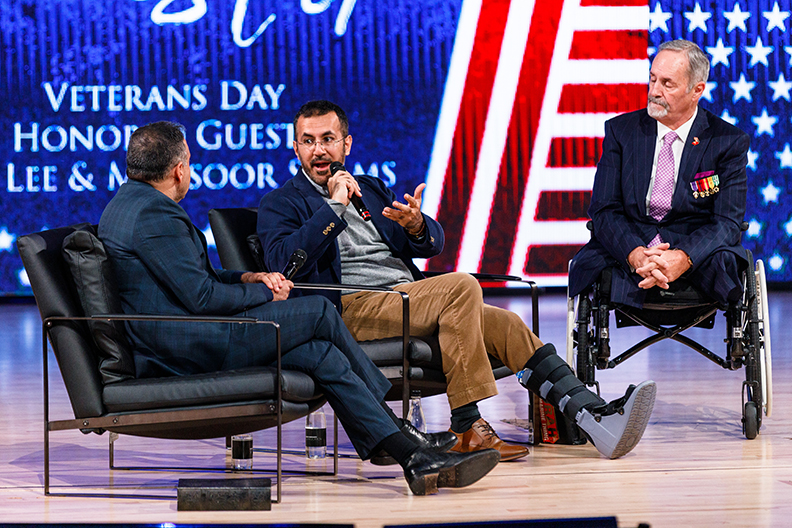 The men began by briefly outlining their lives, with Lee growing up as the son of a preacher and becoming a Christian at the age of 10. While serving in the Marines in South Vietnam in 1971, Lee’s life was changed both physically and spiritually when he stepped on a land mine and lost both legs.

“Somebody once said that you never live until you almost die, and I know what that means,” Lee said. “God spared my life and I’m here today, and I’m glad God loved me enough to chase me. God doesn’t necessarily do things to us; He does things for us because He loves us.”

Shams moved with his family to America from Pakistan at the age of 6, and as a child he spent time in the foster care system, including several months in a Christian home. That experience, among others, led him to hold Christianity in high respect in quite a literal way, as he keeps a Bible with his name on it at an elevated level in his home next to his Quran.

“For a second, I want you to throw out whatever you may have heard of the Islamic faith,” Shams said. “You’re getting to meet me here today ... and learn from someone who says they are a proud Muslim, a proud American, and a proud Marine.” 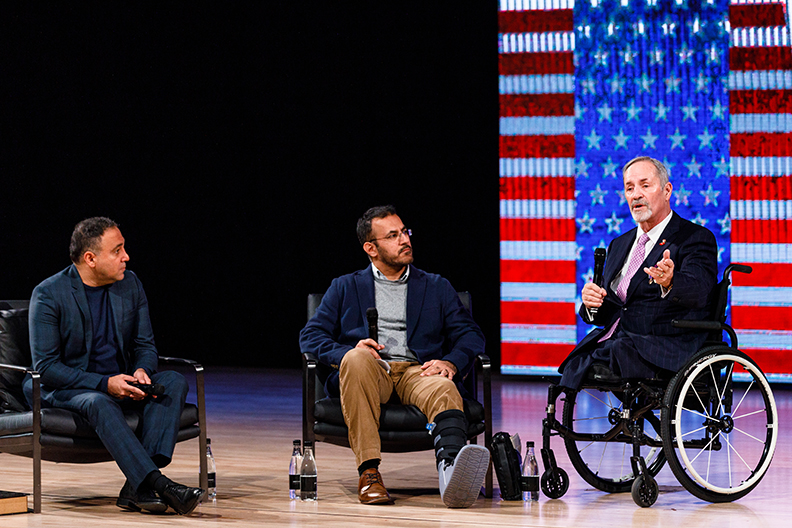 Lee and Shams still carry the discipline and values formed in their time in the Marines, especially the principle learned in boot camp that life is never about oneself; it is about the man or woman next to them.

“I tell pastors all the time that if you ever get a Marine in your church that commits their life to Christ, you’re probably going to have a great servant of the Lord,” Lee said. “It’s already built in and they know to be loyal, they’re disciplined, they know how to take directions, and they’re willing to serve.”

Regardless of the various differences in their faiths, there is no need for division or separation in American society, Shams explained.

“We need to realize that this world and this country encompass a lot of people from different backgrounds ... and we need to remember that regardless of my faith or your faith, we don’t need to be divided,” Shams said. “I can respect your faith and you can respect my faith, and we can still be brothers and sisters.”

They then began to unpack the principles of their faiths and point out the similarities and disparities, including the role that Jesus plays in relation to one’s salvation. In the Muslim faith, Jesus is considered to be a prophet equal to the likes of Noah, Abraham, or others, and while they agree that His story does consist of miracles, the resurrection and ultimate significance behind Jesus’ life and death on Earth is not recognized.

Lee shared the Christian stance on Jesus’ role in humanity’s salvation, which is that of the Savior. 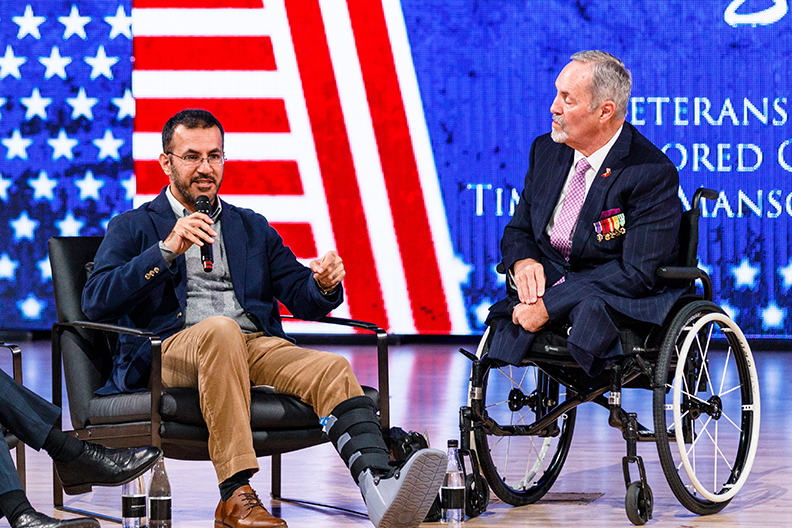 “Jesus Christ had to die; there had to be a price to be paid for our sins and we couldn’t pay the price ourselves,” Lee said. “We believe that God loves the whole world, with no exceptions, enough to give His only son to die on an old rugged cross to pay the price for our sins. That salvation is a gift of grace, we don’t deserve it and we can’t earn it ... and all we have to do is reach out and receive it.”

Branching off of this idea, they shifted to the topic of sin’s presence in the world and how entrance into Heaven is possible. For a Christian, sin is something that exists in every person from the moment they are born, and this sin nature can only be forgiven through accepting Christ’s sacrifice. On the other side, Islam sees sin as something that is not immediately present in one’s life, though it eventually does occur, and the path to Heaven lies in one’s good deeds or simply by the grace of God with no total guarantee of salvation.

“We’re together (on the idea) that God exists ... and that we exist, but we are sinners and our sin separates us from a sinless God,” Nasser said. “Jesus did the only thing that I couldn’t do for myself and removed that barrier. We do believe that salvation is by works — it is by the works of Jesus."

As a guest to campus, Shams said he received an unexpectedly warm welcome, noting that he felt like he was with family during his time at Liberty. Even as the event concluded, he encouraged the audience to continue discussing the topics they had heard and invited them to reach out to him personally.

When he originally announced that he would be speaking at Liberty, Shams said many members of the public were surprised at his decision.

“Coming to Liberty University, I got a lot of weird messages from random people all over the place saying ‘Are you serious?’ or ‘You’re crazy,’” Shams said. “If I had let my fear or an intimidation factor stop me from coming here today, I would not have met this wonderful (Liberty) family.”