Government Moot Court Team moves up to No. 6 in the nation

One year after earning its first top 10 ranking by being named the ninth best program in the country by the American Moot Court Association, Liberty University’s undergraduate Moot Court Team recently advanced to No. 6. 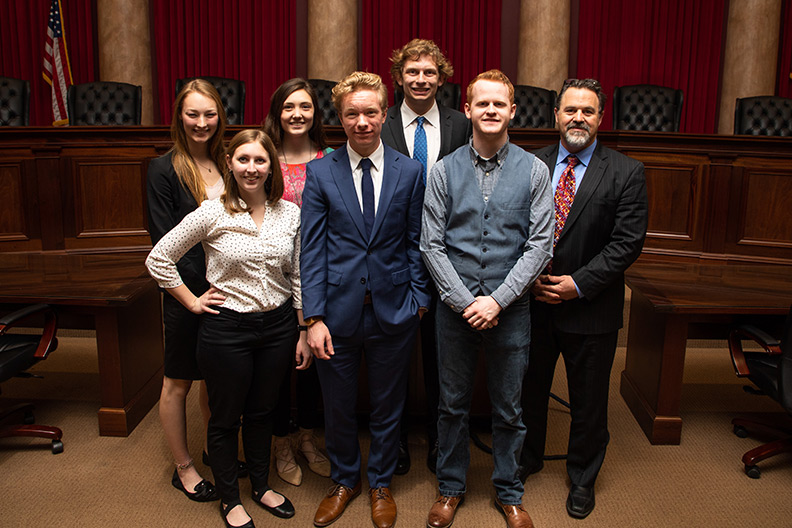 “I continue to be blown away at the successes Professor Robert Robertson (coach) and his Moot Court Team have had across the country and overseas in recent years,” said Robert Hurt, dean of the Helms School of Government. “This new ranking is hard-earned and well-deserved.  It is another great example of Liberty University giving its students the edge when it comes to the practical education needed to be successful after graduation.”

“It is an incredible accomplishment for a team, especially when considering we did not place in the top 20 just a few years back,” said senior Megan Snyder, a 2018 national competitor.

“If we continue to walk with the Lord and teach our underclassmen the things we have been learning, we will continue growing our team in an upward direction,” added senior Eric Meinerding, a 2019 national competitor.

Liberty’s team has advanced to the national tournament several times, and this past summer, two members excelled on an international stage at the Nelson Mandela World Human Rights Moot Court Competition in Geneva, Switzerland, where they placed third. The team of senior Alyssa Rumbuc and recent graduate Tyler Shannon was one of only two American teams at the competition; the other was from Yale Law School. In the team’s final round, before being unable to advance to the finals by a margin of .12 points, they were the only undergraduate team left in contention.

Liberty was one of 48 schools from all U.N. regions around the world to be selected for the Geneva tournament. The trip was partially funded by Liberty’s Center for Research & Scholarship and supported by the Provost's Office.

Moot Court competitions involve simulated courtroom appellate arguments, in the manner of the U.S. Supreme Court, between two student teams who stand for one side or the other of a law’s interpretation before a panel of judges. Team members spend hours preparing for tournaments — each student must be able to read, comprehend, and apply legal concepts from a number of constitutional cases.

Liberty’s current team is now pushing for a place in the top 5, and by striving to win multiple regional championships and sending the maximum number of teams possible to nationals, they believe this goal is well within reach for the ascending moot court program.