Observatory opens window to the heavens for Liberty students, guests 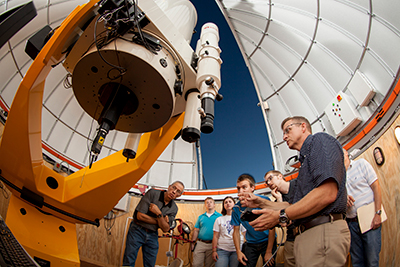 This week’s 50th anniversary of the Apollo 11 mission has inspired many to take a nostalgic second glance at the moon, to reminisce about the early days of the United States’ space program and ponder the future of space exploration.

“The mission was an amazing achievement that captured the minds and imaginations of America and the entire world,” said Dr. Scott Long, who supervises Liberty’s Astronomical Observatory and serves as  chairman of the mathematics department. “It’s hard to overestimate the impact.”

On Saturday, the country will celebrate the July 20, 1969, lunar landing. He said the milestone of the event puts it into perspective how much effort space travel takes.

“It was an enormous accomplishment, with thousands and thousands of people working together to design those systems and all of the procedures to make each step to get to the moon safely,” Long said. “I am excited to see our country expand on our accomplishments in space.” 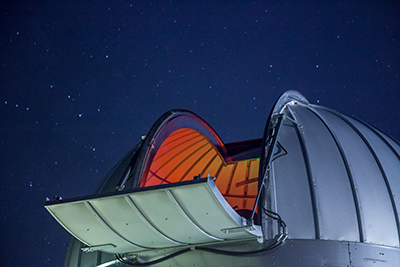 Liberty’s Astronomical Observatory, located on the Equestrian Center grounds on the other side of Liberty Mountain from the bright lights on campus, is a great public resource for not only faculty and students but also for the community at large to observe the heavens and the majesty of God’s creation — from earth's only satellite to galaxies light years away.

The facility, staffed by students and volunteers, averages 200 visitors per month. This summer it is open from sunset to midnight every day except Wednesdays and Sundays, weather permitting. Throughout the school year, it is open from sunset to 11 p.m. on school nights (Mondays and Thursdays) and until midnight on weekends (Fridays and Saturdays).

“Anybody is welcome to go out to the observatory,” Long said. “Students or staff are allowed to go without making a reservation and can bring as many guests as they want. Others can visit our website to make a reservation starting at 6 p.m. the night before they plan to come.”

The observatory features a dome with a roll-off roof housing six 8-inch telescopes, one 12-inch telescope, and one 24-inch telescope (the largest in the region). Each is electronically controlled. Outside there are two pads to allow the telescopes to be repositioned for greater fields of view and for experimenting in astrophotography.

Long noted that the moon, which reached its full phase on Tuesday, won’t rise until late in the evening this weekend — at around 10:30 p.m. tonight (Friday) and 11 p.m. Saturday, making its ascension all the more climactic for visitors.

“We won’t have astronomical twilight until around 10, when there will be nice dark skies to get exposure pictures of the night sky,” said Jakob Sauppe, a summer staff member at the observatory. “Once the moon rises, you’ll have excellent options for moon photography … through one of our telescopes.”

“It will be pretty low in the sky,” Long added, “but if the weather cooperates and it is visible enough, our volunteers and student workers could possibly point out the Sea of Tranquility,” referring to the surface of the moon where the Apollo 11 astronauts Neil Armstrong and Buzz Aldrin landed and first set foot. 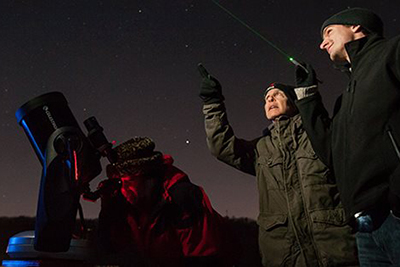 Long was only two years old at the time of the historic moon landing, but has a personal connection to it. His father, Noel Long, worked in Houston as a computer programmer for IBM in NASA’s mission control operations. He was responsible for the code that ran the display board that showed the position of the spacecraft throughout its journey.

“Many kids want to be an astronaut when they grow up, and I certainly did,” Long said. “I joined the Air Force out of my love for space travel and it left a lasting legacy for me that I value highly. The reason I teach astronomy and run the observatory all stems from my time in the Air Force and exposure to the space program through my dad.”

Students are also welcome to join the astronomical club at Liberty. To schedule a visit to the Liberty Astronomical Observatory, visit the website; for hours of operation, view the Facebook page.