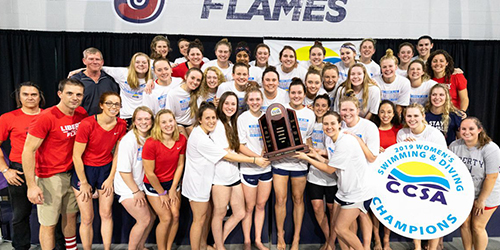 The Lady Flames, who became the first CCSA school to host the four-day meet, captured their second CCSA title five years to the day after their first championship in 2014.

Liberty finished the meet with program records for podium finishes (27) and event wins (10) at a CCSA Championship meet.

Senior Alicia Finnigan became the first Lady Flames swimmer to win one event (the 200 butterfly in 1:56.61) in three separate CCSA Championships and set a program record with 10 career podium finishes.

Read the full story on the Liberty Athletics website.