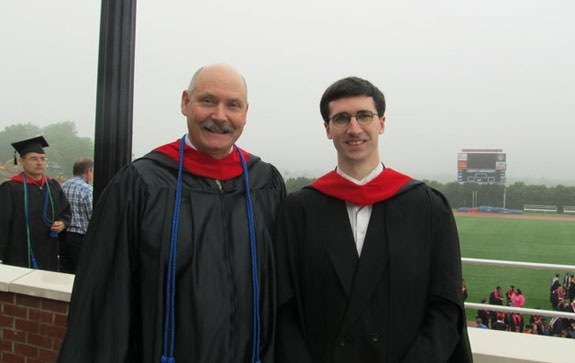 Edgar Moser, 56, and his son James Moser, 28, do many things together – both are teachers and partners in church planting, and on Saturday, both graduated from Liberty Baptist Theological Seminary (LBTS). Edgar Moser earned a master’s degree in evangelism and church planting, and James Moser earned a master’s degree in religion.

Before their big day, Edgar Moser said he was excited to share the moment with his son.

“I’m just thrilled … I’m going to be right beside him [James], so how cool is that? I’m getting to do something that I love and I’m watching him one more time. I’m thankful, blessed, it’s exciting … he worked really hard this year; I think I started out a little bit ahead of him and then he passed me.”

Edgar Moser is a driver’s education teacher at Salem High School in Salem, Va., and has been teaching for about 30 years at several schools in the Roanoke, Va., area. James Moser teaches history at Virginia Western Community College in Roanoke.

James Moser said the summer intensive and online learning opportunities at LBTS conveniently fit with their schedules. Both commuted from Roanoke occasionally for classes and conferences.

Edgar Moser felt God was calling him to plant Life Pointe Church in Roanoke in 2008 through community outreach ministries. The church began holding Sunday services and Bible studies in February 2010 and currently has about 30 regular attendees. He said his seminary classes helped him to stay encouraged while starting the church and that he believes his degree will be very valuable as he leads the congregation.

“I really got a lot out of those classes. So many of those books I would have bought whether they would have been required or not,” Edgar Moser said. “I’m using things that my degree was made up for … there are things that I’ve learned that I’ve passed on to my small groups.”

He said his son has been very supportive of the church plant, and helps him out in many ways at home and at church.

“He’s been watching me speak in camps for 20-something years, and so finally I said, ‘God’s put it on my heart -- we’re going to plant a church, and he was the first person I told. … It’s nice to have your son believe in what you’re doing,” Edgar Moser said. “I don’t know how many fathers and sons have that kind of relationship where we’re like good friends rather than just father and son. I’m blessed, I really am.”

James Moser earned a bachelor’s degree in history from Roanoke College and a master’s degree in humanities from Hollins University. He said his goal for the near future is to complete the Master’s of Divinity program at LBTS or to begin pursuing his Ph.D. in theology and teach religion courses at the university level. He hopes to one day become a chaplain and work with the United States Air Force Auxiliary. He has been married to his wife, Ashley, for four years.

Edgar Moser earned bachelor’s degrees in business and education from Radford University. He hopes to work toward becoming ordained in the future. He and his wife, Ginny, will celebrate their 30th anniversary in June.