Liberty University College of Osteopathic Medicine (LUCOM) heard a firsthand account of an innovative heart procedure from leading medical experts who perform it and one of their patients who benefited from it — Liberty’s own, President Jerry Falwell.

Dr. Jim Thompson, a surgeon and medical director of Child Cardiology Associates, and Professor Anthony Nobles, founder and CEO of Heartstitch and an inventor of multiple medical devices, addressed students on Wednesday in LUCOM’s auditorium. The event was part of the medical school’s Grand Rounds series, where guests share unique medical presentations that focus on specific problems and treatments. The event was streamed live at the Center for Music and the Worship Arts Concert Hall as a “Convo Select” open to the student body. It was also streamed live on Facebook.

At the beginning of the presentation, Thompson outlined the case of a patient he had recently treated with the new NobleStitch device, which closes holes in the heart. He described the patient as a 56-year-old active male who had two minor strokes in 2016 and issues with migraines throughout his life. At the end of his lecture, Thompson revealed that the patient was Falwell, much to the surprise of the student-doctors. 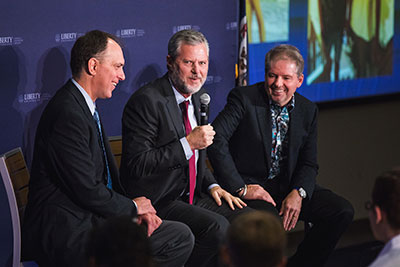 Thompson is board certified in pediatric cardiology and researches technology to close holes in the heart (known as a patent foramen ovale, or PFO), without open heart surgery. Nobles, the inventor of NobleStitch, has invented more than 150 medical devices, secured more than 70 patents, and has presented at a wide array of global conferences and universities, including the American College of Surgeons, the Society of Vascular Surgery, and Harvard Medical School.

The NobleStitch procedure involves a microscopic needle that sews the hole back together without requiring a permanent device implanted in the heart. The minor surgery is completed in under an hour. The procedure was approved by the FDA last year and since then, about 130 procedures have been completed in the U.S. (1,558 worldwide), with no patients reporting complications.

Falwell joined Thompson and Nobles at the front of the room to describe his experience. He said he had discussed his minor health issues with U.S. Secretary of Housing and Urban Development Dr. Ben Carson when Carson visited in May to speak to LUCOM’s first graduating class. Carson connected Falwell with Nobles, who determined Falwell was a candidate for the procedure after a PFO was discovered.

Falwell underwent the procedure last month in Fairfax, Va., the only location where it is currently available in the U.S.

“It’s a miracle that it happened the way that it did,” Falwell said. “Dr. Thompson said I was very fortunate that I hadn’t had a major stroke.”

Thompson explained that everyone is born with a hole in their heart, but it normally closes after birth. However, one in five people still have one.

“Most people go to their grave not realizing they have a PFO,” Thompson said. “But if you look at young, healthy people who have strokes and you can’t find a reason, about 50 percent of those people have PFOs.”

Several different devices have been used to close holes in the heart, but they carry risks of leading to more complications, such as blood clots, Thompson said. The NobleStitch completely closes the hole, leaving no space for clots to form. 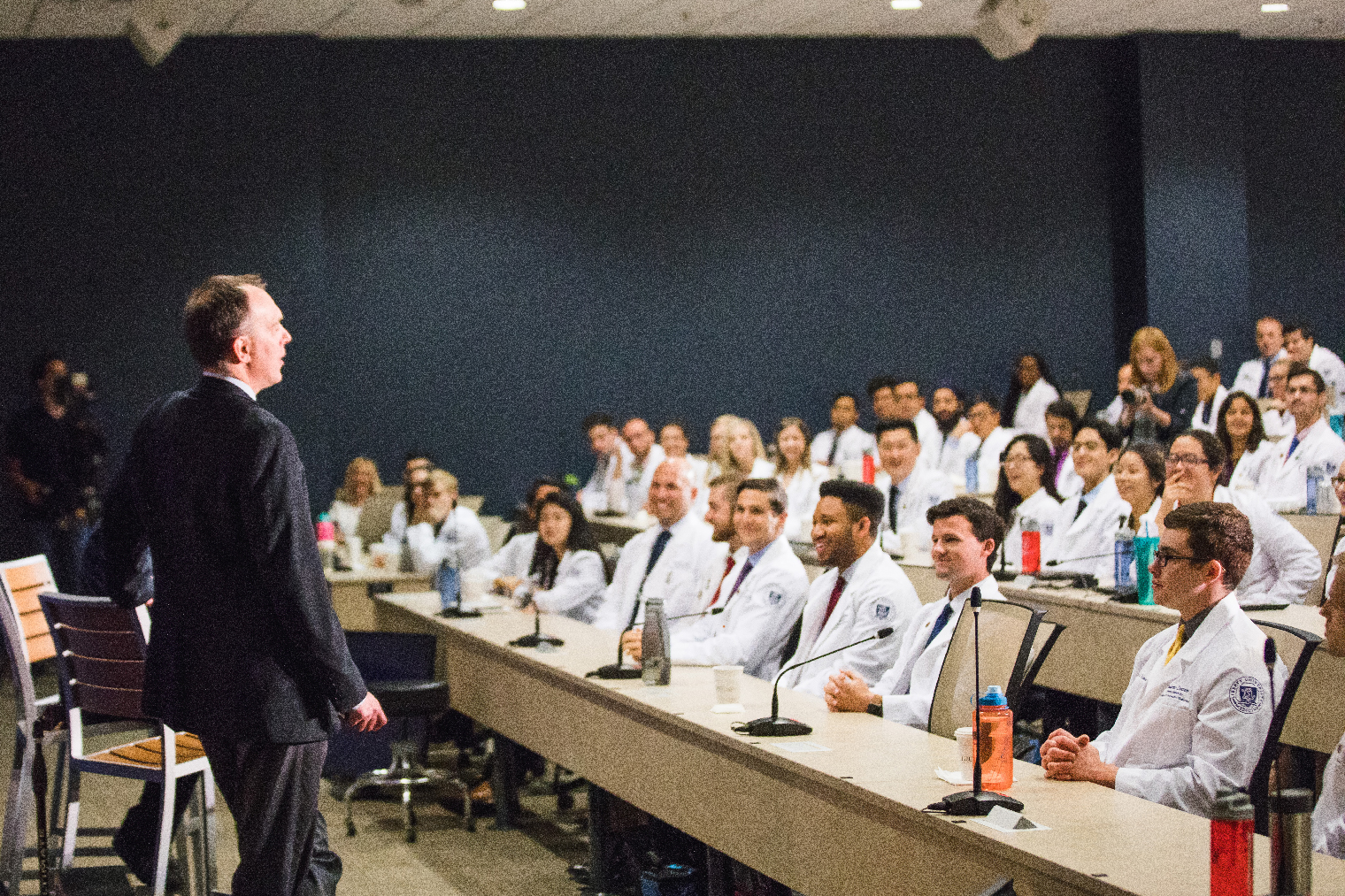 “When I look at things from a biomedical perspective, I try to think about what can be done in surgery percutaneously without cutting someone open,” Nobles said. “Why would you do something that is less effective? That was the whole premise to the start of creating this.”

Thompson, Nobles, and Falwell encouraged students to learn to collaborate across the medical field to create new procedures and technology that will change the course of medicine.

“There’s a collaboration that exists in this field,” Nobles said. “We break it into three parts: engineers, physicians, and scientists. If those three people can learn to speak the same language, that’s how we solve all these problems.”

Falwell told students if they have an idea, “don’t just dismiss it.”

“Try it,” he said. “That’s what has made modern medicine the way it is today, all these brilliant people willing to test ideas out, entrepreneurs really. That’s what built this university.”

Falwell said he hopes to see Liberty’s student-doctors take their knowledge to underserved markets so they can help more people in need of procedures like the NobleStitch. 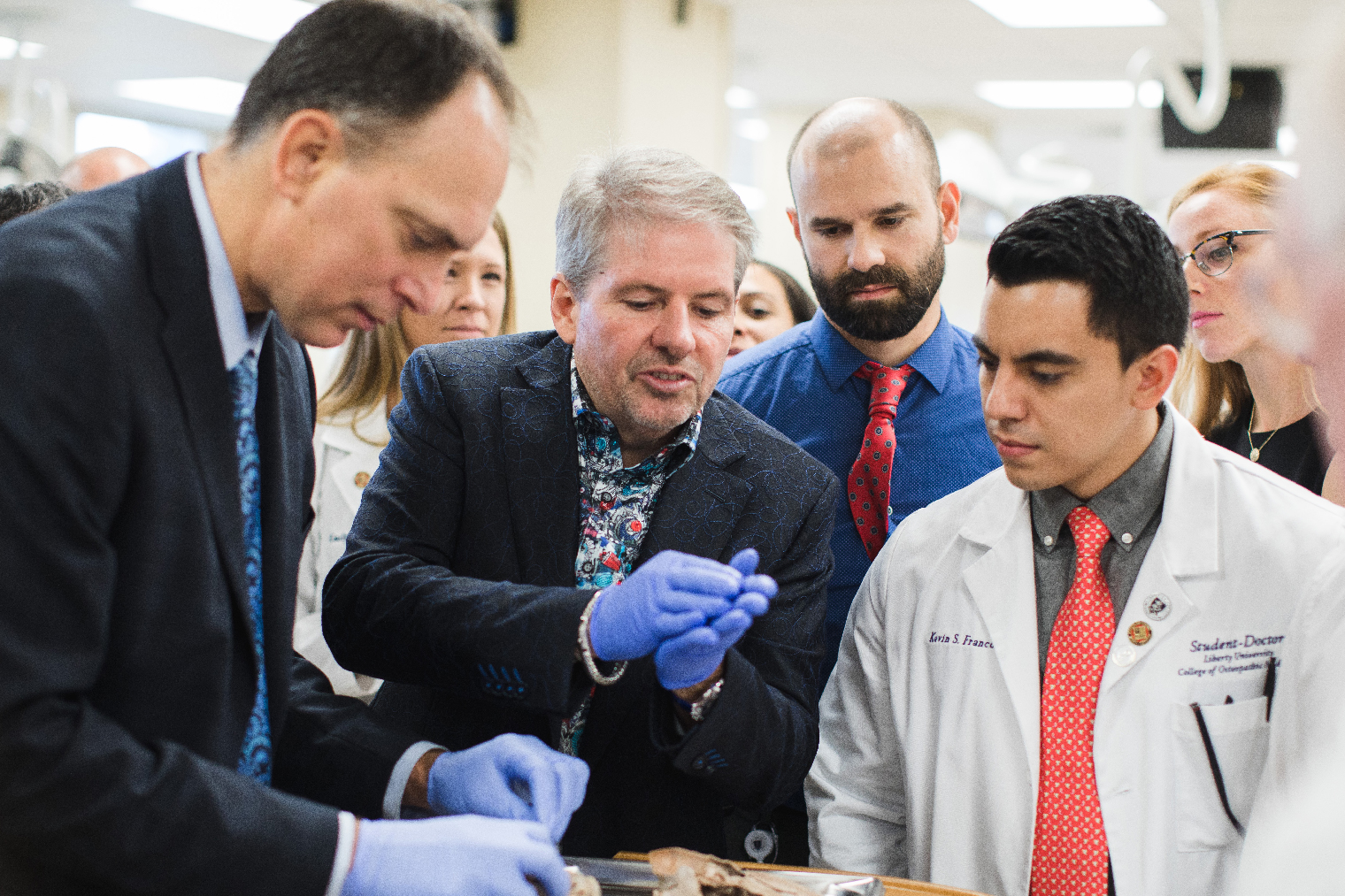 At the end, the group participated in a short Q&A session with student-doctors and took time to meet with students afterward.

“It’s good to know that Liberty has contacts at different hospitals that can get us connected and help us collaborate with other experts in the field,” she said. “We don’t have to have the monopoly on knowledge on an issue. We can reach out to others who might be better equipped to grow technology in medicine.”