As students prepare for Finals Week, starting on Thursday, Liberty University provided some pure entertainment value at Monday morning’s Convocation in the Vines Center, bringing in four members of the Harlem Globetrotters to help set the stage for tonight’s 7 p.m. exhibition game.

The foursome, led by Anthony “Buckets” Blakes, was introduced by Liberty Senior Vice President for Spiritual Development David Nasser in a panel discussion following a video about the team, which has performed more than 25,000 times in 122 countries since its founding in 1926.

The discussion touched on how the Globetrotters, the all-black team from Harlem, N.Y., helped break down racial barriers in the late 1940s by defeating the all-white Minneapolis Lakers — now the NBA team based in Los Angeles — for the unofficial world championship. That led to team member Nathaniel “Sweetwater” Clifton becoming only the second African-American player to sign an NBA contract in 1950 with the New York Knicks. 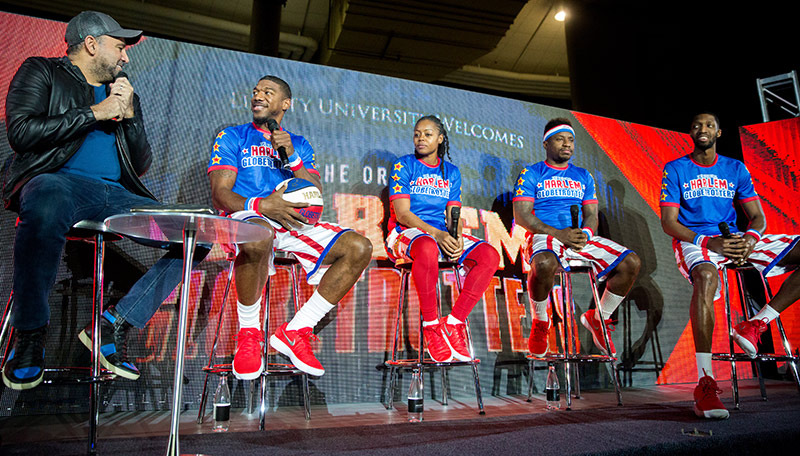 The Globetrotters also talked about their world-renowned tour that includes performing at public elementary and middle school assemblies around the United States, where they share an antibullying message.

“I feel blessed to be a part of a team that’s not just about the game of basketball, but about the game of life,” Blakes said, referring to an “ABCs” program that encourages action, bravery, and compassion. “The best way to be compassionate to someone who’s been a victim of bullying is to make that person a friend. Invite that person to lunch with you or play with them at recess. There’s always strength in numbers.”

He said emotional abuse through negative social media has overtaken physical bullying in many schools.

“We live in an era of cyberbullying,” Blakes said. “You can ruin lives by sending negative emails [and] text messages or posting negative videos on the worldwide web, because once it’s out there, it’s there forever.”

After the panel discussion, the Globetrotters took to the court, starting in a “Magic Circle” around the LU logo at center court. Joining Blakes was the 6-foot-7-inch Mack “Bulldog” Richardson, 5-foot-2-inch Jonté “Too Tall” Hall, and Cherelle “Torch” George, one of five female players on the roster. They showcased dazzling ball handling tricks to the team’s signature song, “Sweet Georgia Brown.”

A dozen Liberty students were randomly selected from the crowd for a chance to win $10,000 by making a layup, foul shot, 3-pointer, and half-court shot in 30 seconds or less or by sinking a half-court shot (as Blakes demonstrated by banking in his third underhand attempt). 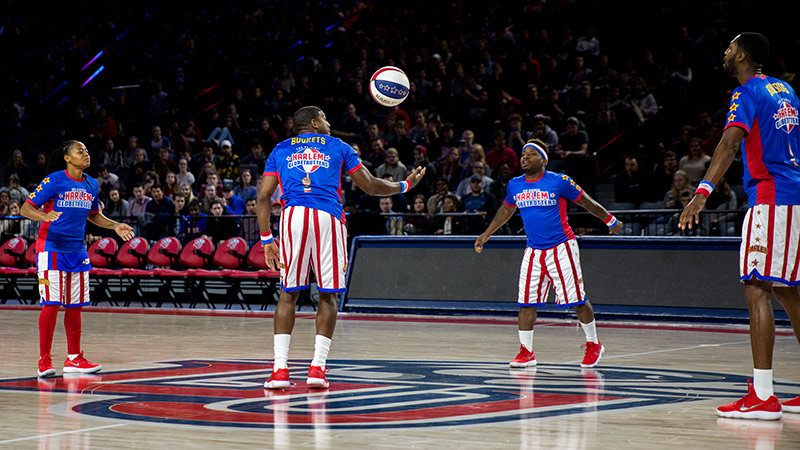 Twenty-four members of the Harlem Globetrotters and Washington Generals — who have faced each other in friendly, fun-filled contests for the past 63 years — will be on hand for tonight’s showcase in the Vines Center. The last time the Generals upset the Globetrotters was 1971, the year Liberty University was founded. Tickets, ranging from $22 to $59, are available online.

“You’re going to see some high-flying dunks, amazing dribbling, and four-point shooting and see ‘Too Tall’ cut a rug,” Blakes said. “There will be a lot of fan interaction, too. We sign autographs every single game we play before we go to the locker room.”

To warm up the crowd before Convocation started, Liberty Shepherd Patrick Campbell played a game of one-on-one with Senior Resident Shepherd Nick Acree, who also serves as chaplain for the Flames’ Men’s Basketball team. Campbell plans to take his 2-month-old son to tonight’s main event and is encouraging students to join him. 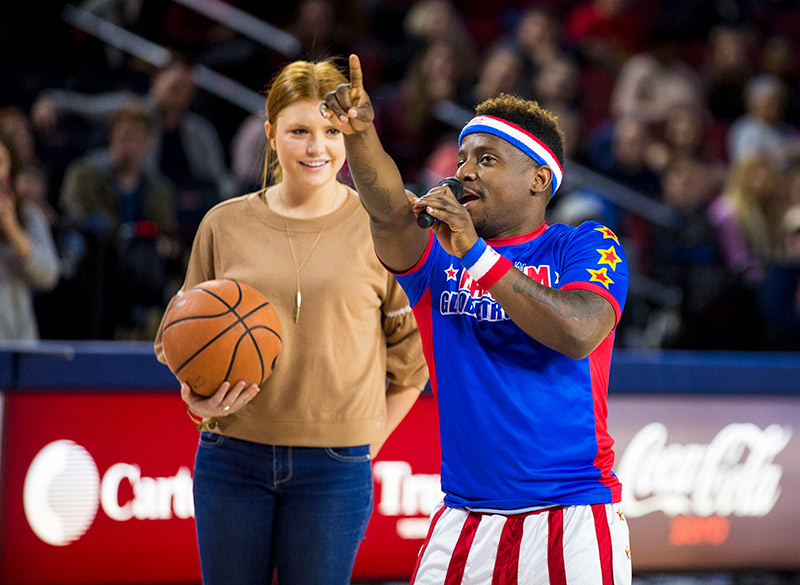 “It’s a chance to clear your head a little bit and make your study time more effective, rather than trying to muscle your way through it,” he said.

Students will enjoy a Christmas-themed Convocation on Wednesday, the last Convocation of the Fall semester. From Dec. 13-19, Liberty is offering a number of “De-Stress for Exam Week” activities in the Jerry Falwell Library, with plenty of board games, puzzles, Christmas crafts, and coloring books set up in the atrium, where therapy dogs will be available from 2-4 p.m. on Wednesday, Thursday, Saturday, and Sunday and from 11 a.m.-noon on Friday. Additionally, hot chocolate and coffee will be served there from 5-7 p.m. on Wednesday, and a Hammock Haven will be set up all week in the Terrace Conference Room.