There was a game day atmosphere in the Vines Center on Friday as a larger-than-usual crowd packed Liberty University’s arena for a Convocation featuring an all-star lineup of sports personalities, including NFL free agent Christian Ponder and his wife, Sam Ponder, a 2009 Liberty alumna and the host of ESPN’s “Sunday NFL Countdown.”

Approximately 2,000 College For A Weekend (CFAW) guests, getting a taste of life at Liberty, were welcomed by President Jerry Falwell, who brought his friend and former Flames Football player Kelvin Edwards to the stage. Edwards played in the NFL after setting gridiron records at Liberty. Edwards and Falwell lived in the same residence hall when they attended Liberty. The two recently reunited in Waco, Texas, where they watched Liberty’s football team beat Baylor University. Edwards left Liberty in 1986 as its all-time leader in receiving yards (2,546) and receiving touchdowns (24). He was inducted into the Liberty Athletics Hall of Fame in 2009.

Expressing his amazement at how much the campus has grown, Edwards told students to relish their time here.

“It is an amazing day and time right now. You have a lot of things to do at Liberty University,” he said. “It is time for you to stay focused on your goals and principles that God has put in you. … Enjoy the time and the moment where you are; there is nowhere you can be that is better than Liberty University right now — nowhere in the country.” 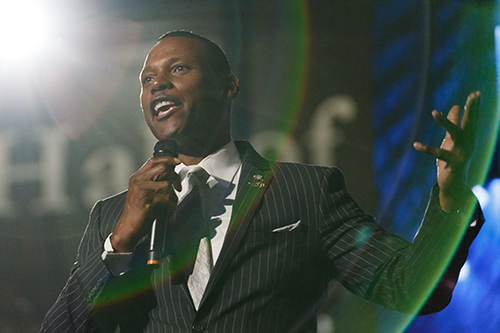 After trading humorous memories about their time at Liberty, the classmates then welcomed the Ponders to the stage.

Samantha Steele Ponder started her career in sportscasting as a sideline reporter for the Liberty Flames Sports Network and rose quickly through the sports media ranks, working for the Longhorn Network, FOX Sports Net, and then ESPN’s College GameDay. She recently replaced broadcasting legend Chris Berman as the host of “Sunday NFL Countdown.”

Sam Ponder told the CFAW visitors to enjoy their weekend, just as she did when she attended a CFAW before coming to Liberty in 2007.

“It made a huge impression on me,” she said of the popular weekend event.

Though it has only been a few years since she last visited Liberty, Sam Ponder said the campus has changed dramatically.

“It is incredible what has happened here, even just in the last few years,” she said. “Obviously, you guys have got a lot going on. It is important to me, as someone who went here, that you are a part of a school that is always getting better. When you leave, you want to know that the place you went to is going to make you proud down the road. And this has definitely been that for me.” 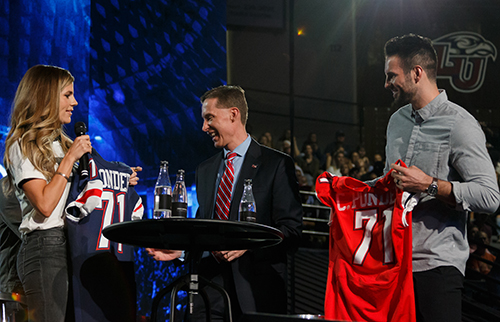 She talked about the invaluable experience she gained covering basketball and football games at Liberty and how that sparked her broadcasting career.

“It was the best possible work experience I could have gotten,” she said. “Honestly, it was the start of everything for me when it comes to hosting and reporting.”

Sam Ponder said she is grateful for the relationships she built at Liberty and the people who saw her potential.

“You need those people in your life,” she said. “To me, that is why Liberty is so special. There are so many people around who will call out things they see in your life that maybe you are not able to see yet. … I needed somebody to see something good in me.”

Christian Ponder — whose NFL career has included stints in San Francisco, Oakland, and most notably, Minnesota, where he threw for almost 3,000 yards in 2012, leading the Vikings to the playoffs — shared about his faith journey.

“Going into the NFL, I honestly would think, ‘If I pray, if I get in the Bible, then I am going to play well on Sunday.’ That was my faith; I was using God for myself (like) that is how He works,” he said. “What I realized was my faith was so up and down with how I played. When I played well, I was like, ‘Hey, God is awesome.’ If I didn’t play well, it was almost like I blamed Him. That is not how that relationship works at all.”

He said God used his relationship with Sam to draw him into a deeper faith, which he strives to live authentically, day-to-day.

“Do I have it figured out? No. In the timeline of your spiritual life, you are always trying to go this way,” he said, pointing upward. “You don’t want the circumstances of your life to dictate your faith.”

The couple shared laugh-inducing stories of their courtship and marriage and showed photos of their two children: Scout and True, who were in attendance.

“Kids have revealed my own heart in many ways,” she said. “It is that constant choosing someone else’s good above your own. … I almost hear the voice of God in my own head, ‘You think you want this job or this relationship or whatever and are begging for it and throwing a fit, and I’ve got something so much better and so much more satisfying. Quit worrying about what you know because I know so much more.’”