Nearly 600 Liberty University faculty and staff pounded the pavement and made a positive impression on Lynchburg this past Saturday, joining more than 3,000 runners in the 44th annual Virginia 10 Miler and 4 Miler races. (See gallery of images from the event below.)

Besides having the largest participation of any area corporation with 594 registrations — 281 in the 10 Miler, 229 in the 4 Miler, and 84 who walked the 4 Miler — Team Liberty won five of the six corporate divisions.

“The Virginia 10 Miler and 4 Miler is such a great community event for us to be involved in with so many runners of different levels out on the course,” said Liberty Recreation Centers Director Jamie Swyers, who coordinated race registration for Team Liberty participants. “We have both recreational and competitive runners alike participating and competing, to challenge themselves and to try to win their division.”

As a gold-level race sponsor, Liberty supports the race financially and provides volunteers. The university also pays the entry fees for its employees who sign up, giving each a free T-shirt. Liberty students and employees helped with packet pickup, passed out water and refreshments at rest stops along the course, and lined the streets to spur participants on. 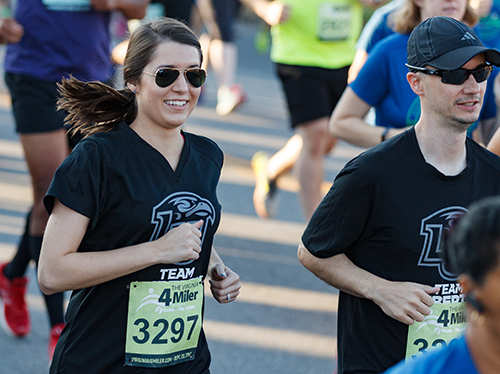 Swyers said the race, which draws elite-level athletes from around the world, definitely pushes runners and walkers to their physical limits. The challenging road course starts at E.C. Glass High School and journeys up and down some of the city’s steepest streets — with the 4 Miler ending at Randolph College and the 10 Miler continuing on to Riverside Park and back to E.C. Glass.

“It’s a tough course, with both the 4 Miler and 10 Miler showcasing Lynchburg’s topography,” said Swyers.

Liberty also logged the most miles in the corporate 100-Mile Challenge, an online training challenge offered through Live Healthy Lynchburg. Faculty, staff, and students totaled 22,927 miles logged from July 1 through Sept. 23, the day of the races. That was more than 4,000 miles over Centra (the runner-up with 18,552) and 8,000 more than the third-place City of Lynchburg (14,095). 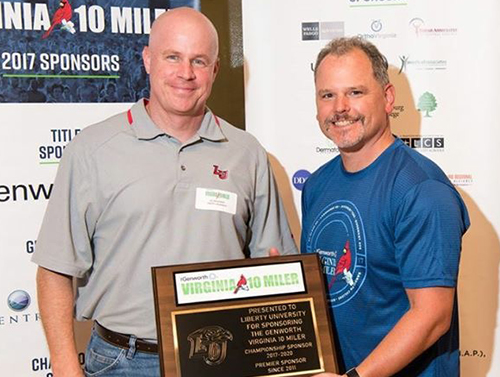 On Friday night, Liberty Senior Vice President of Auxiliary Services Lee Beaumont accepted an award at a reception in Downtown Lynchburg honoring the university for being a premier race sponsor since 2011 and pledging to be a championship sponsor through 2020.

“We are the city’s largest employer and economic engine, and with that status comes a responsibility to be engaged in the community,” said Beaumont, who completed the 4 Miler. “The Virginia 10 Miler is the largest sporting event outside of the (Virginia) Commonwealth Games (also sponsored by Liberty) to be hosted in Lynchburg, and Liberty is proud to be a big supporter of both events. The university has incorporated the race into its Live Healthy Liberty program for quite a few years now and it is something a lot of the faculty and staff look forward to and enjoy training for.”

On Friday night, Liberty sponsored the Amazing Mile Children’s Run, which started and ended near Amazement Square near Riverfront Park in Lynchburg. That event brought out the Flames’ mascot, Sparky, as well as cheerleaders and members of Liberty’s ice hockey teams who sported their jerseys while cheering the 128 youth onto the finish line.

Students, faculty, and staff have many more opportunities to test themselves throughout the school year in the Liberty Mountain Trail Series, with the first race, the Deep Hollow Half Marathon and 5K, set for 8 a.m. Oct. 14 starting and ending at Hydaway Outdoor Recreation Center.