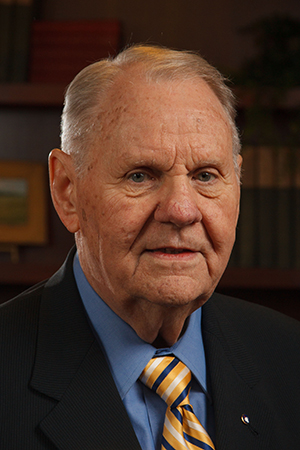 Fleet Browning, 84, a longtime member of the Liberty University Board of Trustees, went to be with the Lord on Friday, Aug. 18. His service to Liberty spanned four decades, starting in the 1980s. In March 2014, he was recognized as an Emeritus Trustee.

Liberty President Jerry Falwell said Browning's impact on the university is immeasurable: "We have the greatest respect for Mr. Browning and all that he has done to grow the university and to keep it grounded in the Christian mission that it was built upon. We value his friendship and tremendous support he's given us over the years. We send our deepest sympathies to the Browning family and will continue to pray for them at this difficult time."

Browning, of Cloverdale, Va. (north of Roanoke), was a retired independent sales representative who brought his business expertise to Liberty's board, drawing on his long career in the steel industry.

A celebration of his life will be held on Tuesday, Aug. 22, at Oakey's North Chapel.